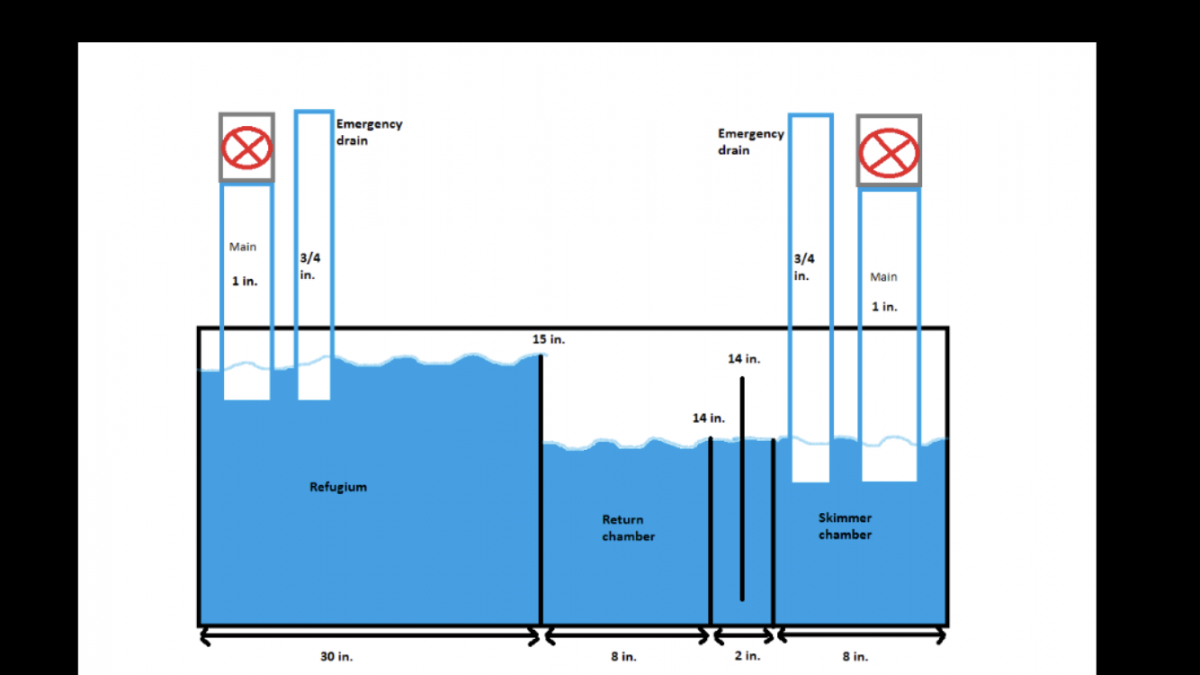 BRS Member
Officer
I kept my emergency off a 45 fitting and only half in the water so if it starts working it’ll start making noise. We all know that noise lol

Chris A. said:
I kept my emergency off a 45 fitting and only half in the water so if it starts working it’ll start making noise. We all know that noise lol
Click to expand...

Thanks for the pic Chris, now I get what you were saying. First time I read it I was thinking you meant the standpipe in the overflow.

BRS Member
Spent a good chunk of today working on the final plumbing. Got 90% of it done. Just need to wait for the two 45s I glued together and spray-painted to finish drying.

So far I've got about 140G of RODI made up. Waiting for last barrel to finish filling. Luckily *knock on wood* no more leaks; pretty sure yesterday was because I didn't clamp the hose down and it floated/pointed upward.

Oh yeah, I figured out why the RODI didn't turn off the other day. I had the RO line connected to the DI canister and that part of the path wasn't "closed" so the ASOV didn't kick in and power everything down. Once I finished connecting that part of the system and closed the ball valves everything shut off within 30 seconds. Duh.

Once the paint dries I'll glue together the last couple pieces, install the j-hooks, and let it all sit over night.

Maybe tomorrow I'll do some leak testing with tap water just to see how it goes. 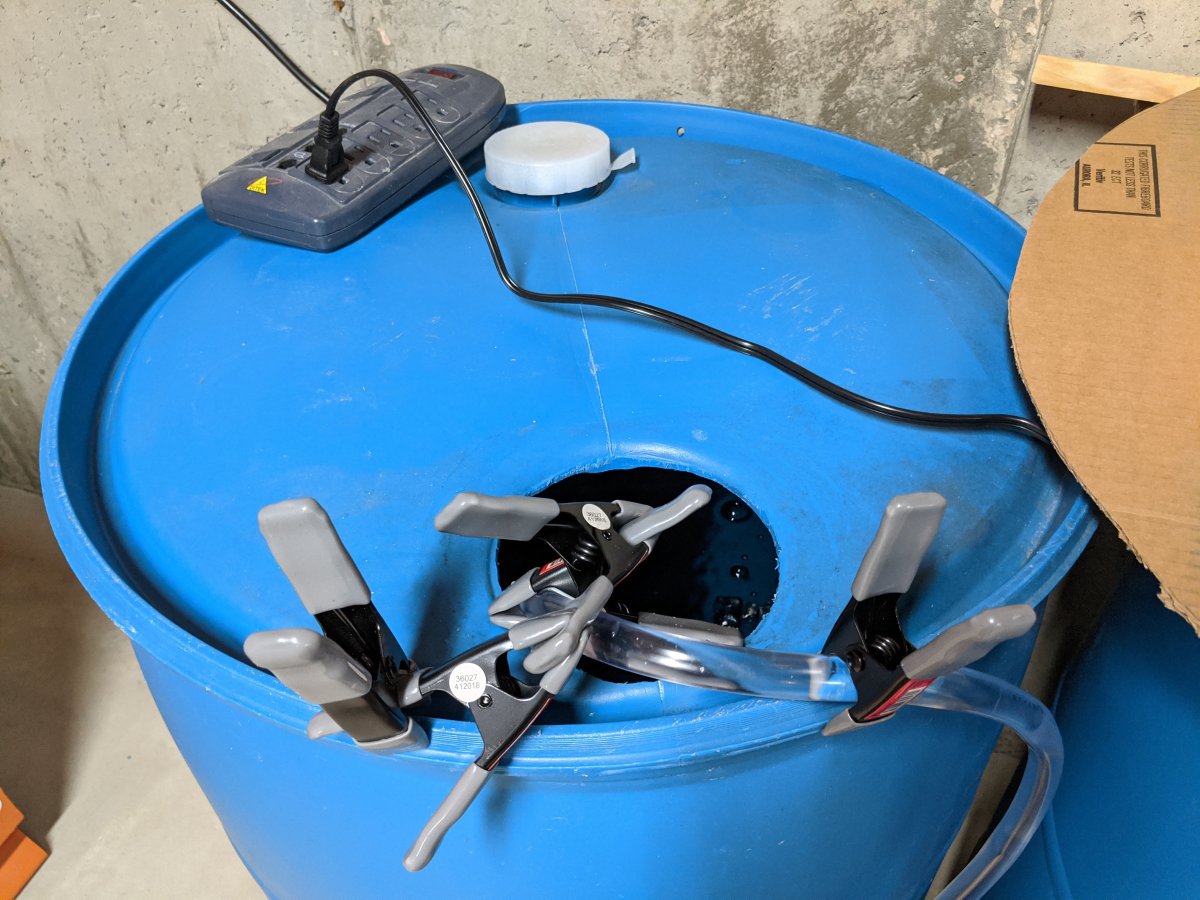 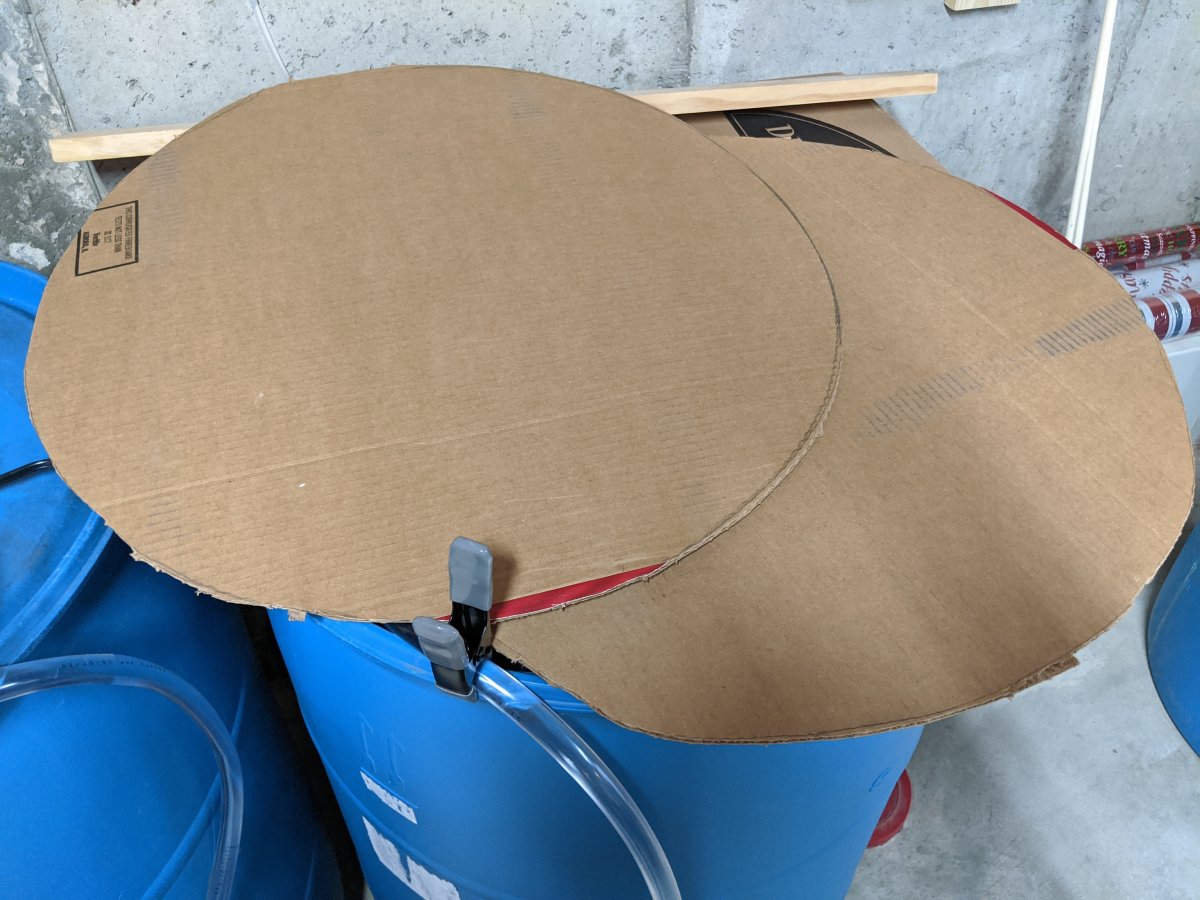 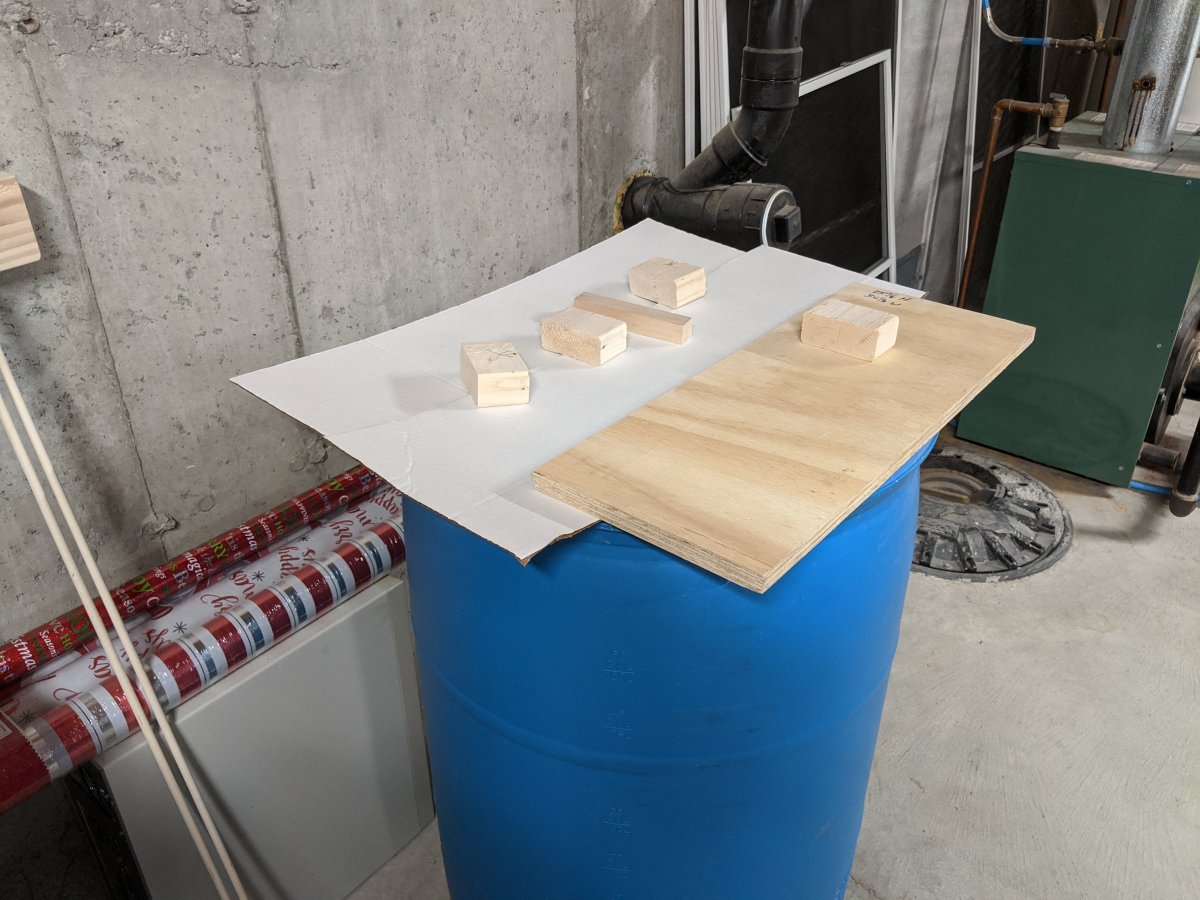 Return line with manifold piece in place. I won't use this right now as I don't have all the fittings to close them off. Not even sure what I'll do with this yet. 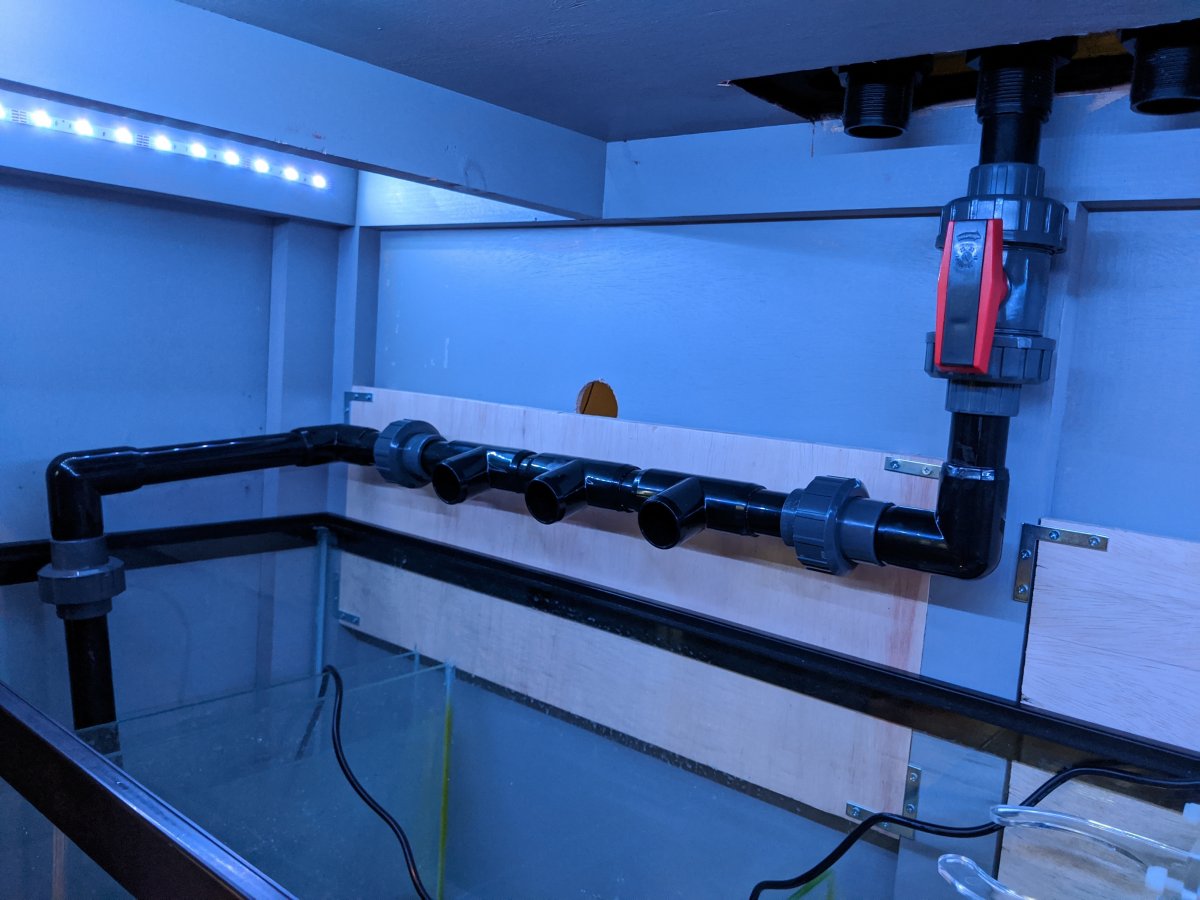 Return line with straight pipe. Will be using this one for the time being. 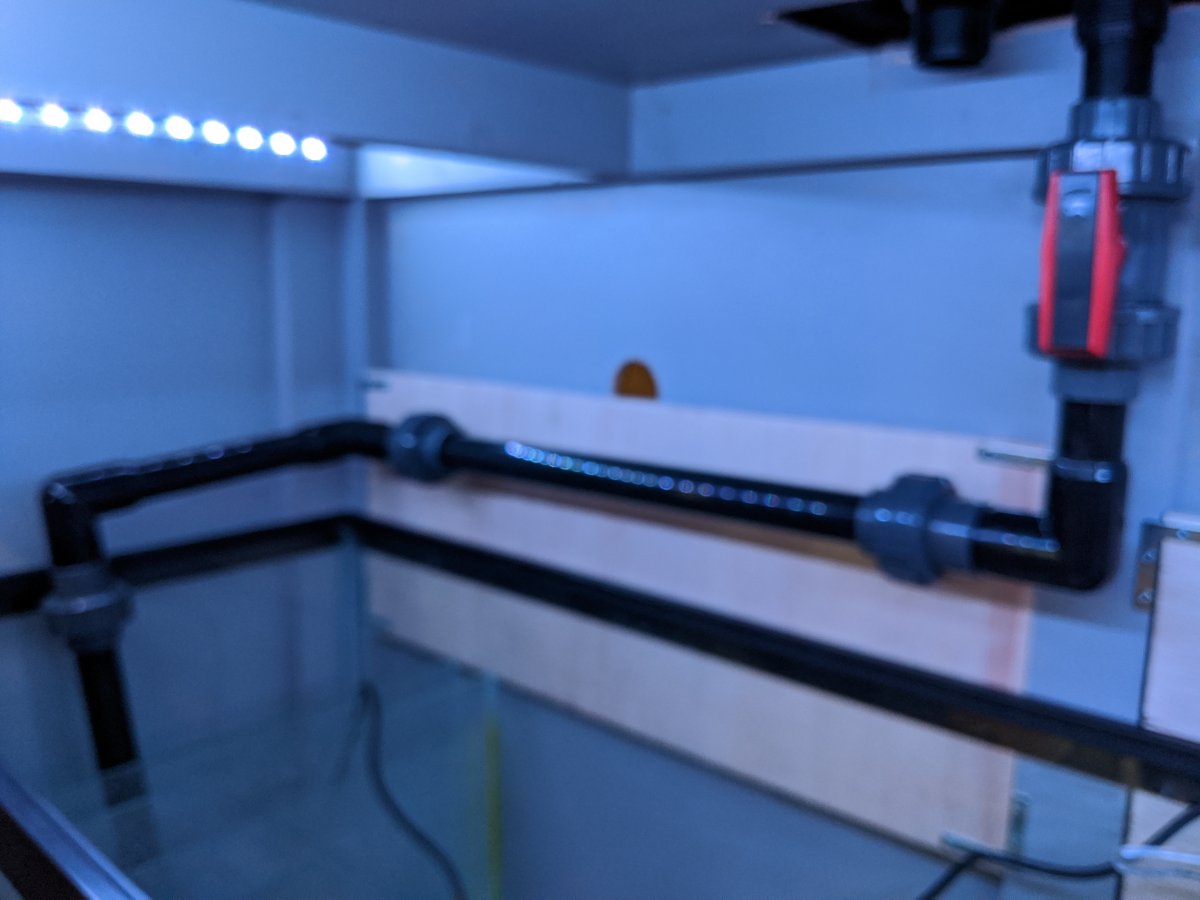 J-hooks and two glued together 45s on my spray paint line. 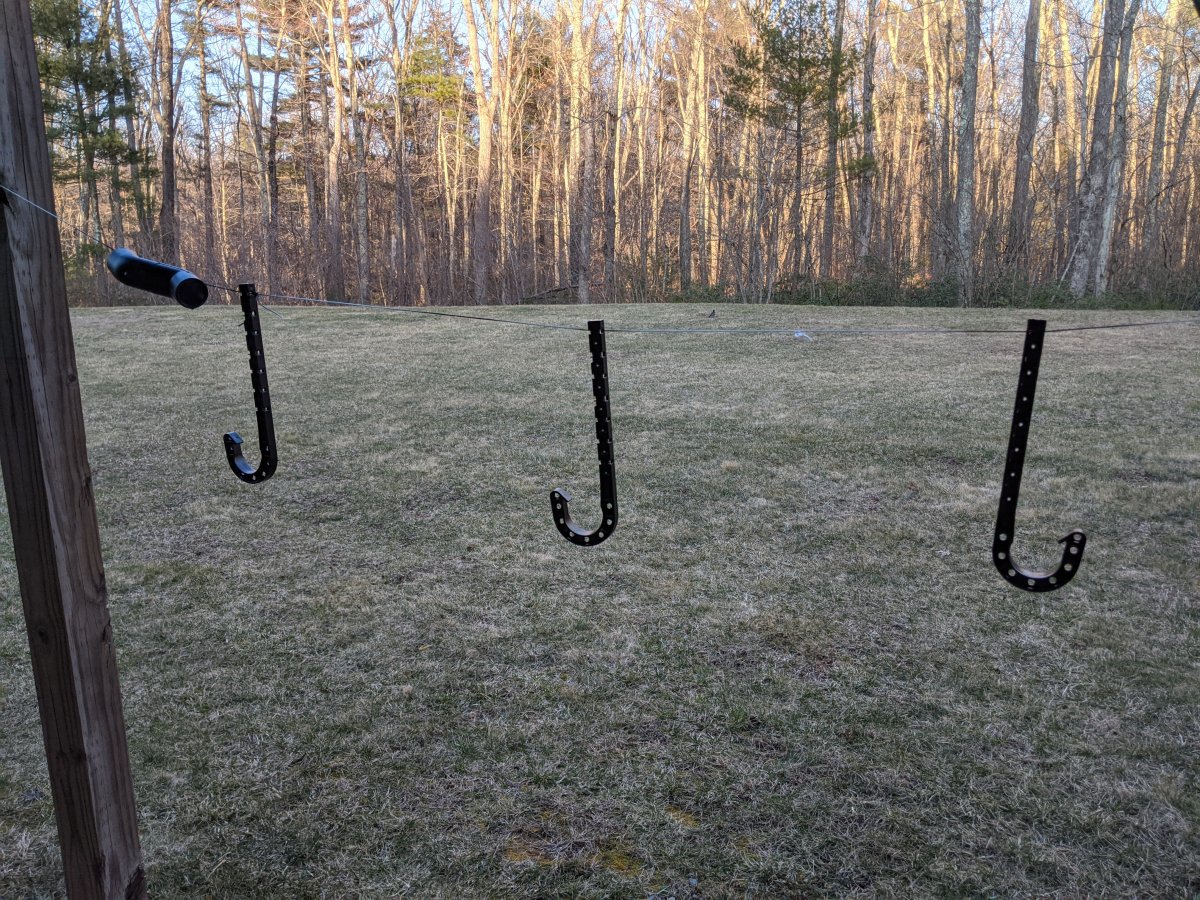 BRS Member
Been looking around for trash can lids, to cover the water barrels, and didn't really want to spent $15+ for the right size. Ended up buy some "flying saucers" from Walmart this morning (you know, the round sleds).

Was walking down an aisle looking for the lids when I saw them. They had orange, green, and blue. $3.50 a piece.

The concavity to them works out great. On the barrels I cut completely open I face the bump down into the barrel. On the one that I just cut a 6" hole in I flip it over.

Picked up some screws and command hooks while I was there. Will see how they work with the J-hooks and the return pump wiring respectively.

Started to fill the sump, then turned on the return pump. Nothing but Er-04. Apparently that means the impeller isn't spinning.

After a short freak-out, then posting a new thread, Chris A. told me to wait a bit and try again. 5-10 minutes later, after Googling (and calming down), I filled the kitchen sink for another test. Success! The pump was working. Not sure why it did that, but I guess that's par for the course with these pumps.

Forgot to open the return line ball valve at first so I was worried something wasn't working. Once I realized that water started immediate flowing to the DT!

DaughterX and SonX assisted while we filled the tank from an outside hose. They were looking for leaks, watching levels, etc.

After getting everything filled (DT/Sump) I had DaughterX unplug the pump and we "tested" a power outage scenario. Plenty of room in the sump, even with some extra water in it.

We also tested pulling the main drain standpipe out and the water levels were still fine. While I had it pulled out I took the strainer screen off the standpipe (I think it was causing suction to occur, making more noise).

Also took the strainer off the emergency standpipe while I had it out.

I did add another straight piece of PVC to the main drain (near the filter cup holder) so it's under the water level like Chris A. pointed out the other day.

I think everything is settled now. Got the return pump dialed all the way down, and the main return line ball valve closed just slightly; this keeps the splash noise level down to almost nothing. I think once things slime up the noise will lessen even more. 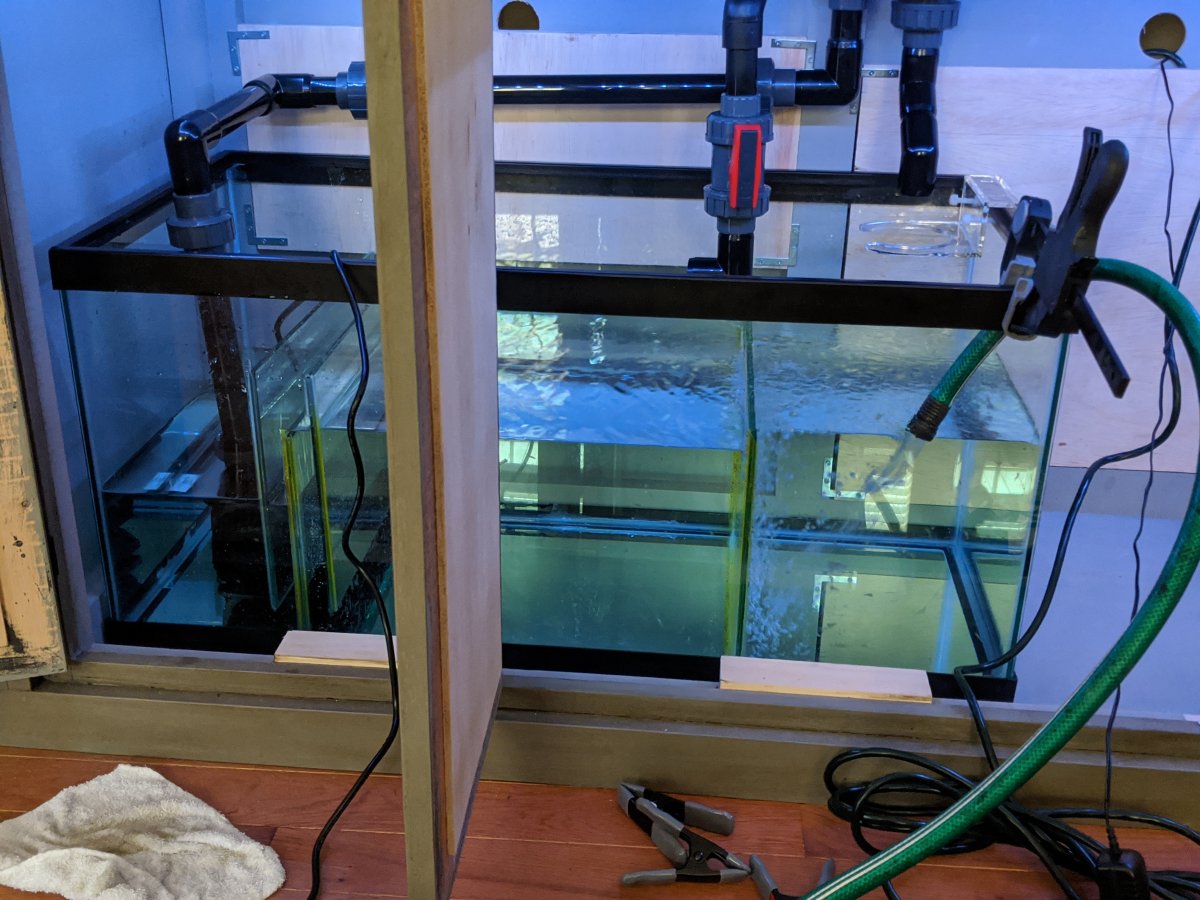 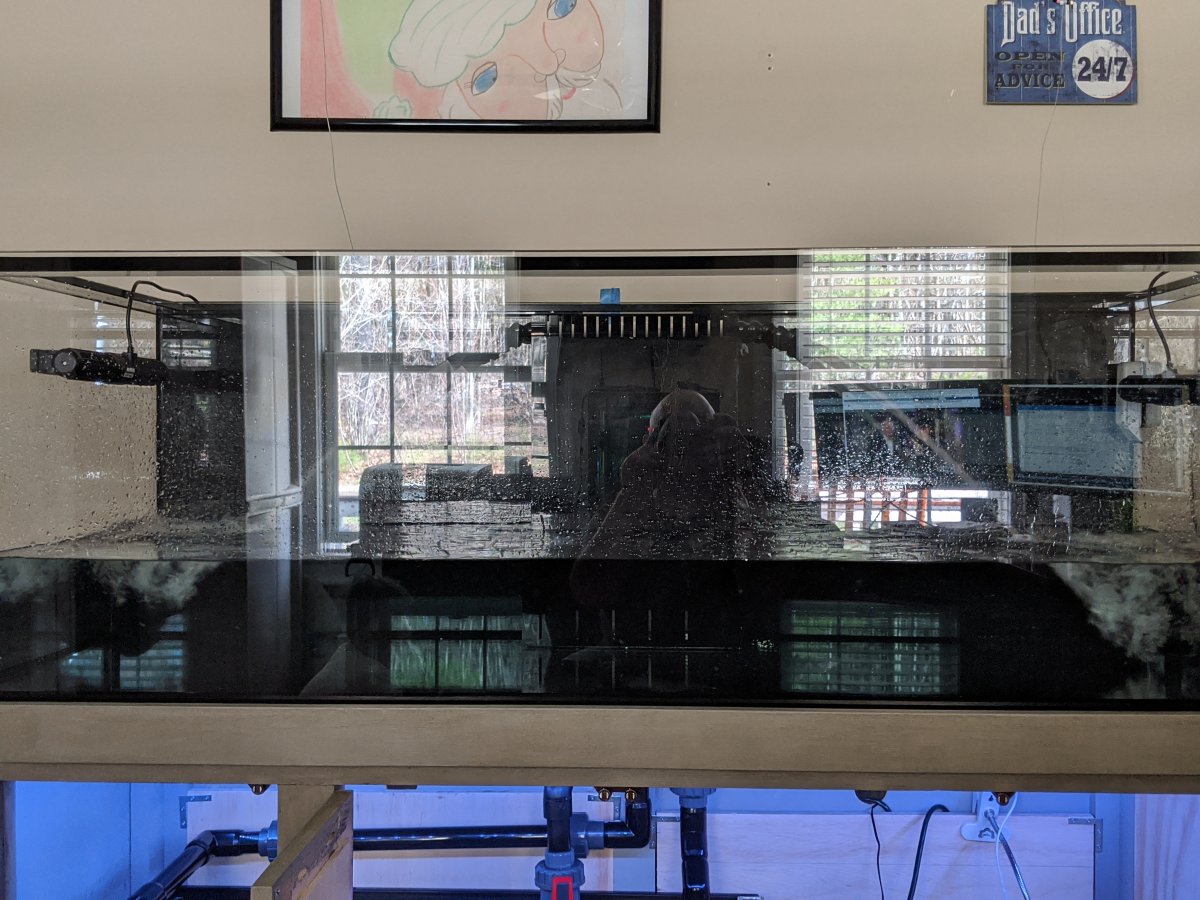 BRS Member
Looks great! I love new builds. Almost half the fun of the hobby is setting up! Good scape!
Last edited: Mar 24, 2020

Bostoncoral said:
Looks great! I love new builds. Almost have the fun of the hobby is setting up! Good scape!
Click to expand...

Yeah, part of me enjoys the build more than the on-going maintenance/etc.

MrX said:
Yeah, part of me enjoys the build more than the on-going maintenance/etc.
Click to expand...

What kind of spray paint are you using?

Is it Krylon fusion? Where did you buy as i've been looking for this and could never find it! LOL

FREAKINRICAN69 said:
+2 on this lol

What kind of spray paint are you using?

Is it Krylon fusion? Where did you buy as i've been looking for this and could never find it! LOL
Click to expand...

Yeah, Krylon Fusion Black Matte. Got it at Walmart.

The spray paint is only on like 2 pieces; I didn't have enough black pvc 45s so I just spray painted some white ones after I glued the pipe together -- it's different from the 45s in the picture above with the j-hooks. For some reason I goof'd and needed a longer join piece between them so I did a different one.

The spray paint is only on like 2 pieces; I didn't have enough black pvc 45s so I just spray painted some white ones after I glued the pipe together -- it's different from the 45s in the picture above with the j-hooks. For some reason I goof'd and needed a longer join piece between them so I did a different one.
Click to expand...

I hear ya. I'll have to double check in the Saugus one to see if not in NH. Thanks and keep up the great work chief. It's looking awesome.

To drain the tank/sump I built the FRANKEN DRAIN!

Instead of lugging buckets out to the street I made up this concoction ... goes from the pump to a 1" SLIPxTHREAD to a 1" to 3/4" reducer to a quick connect hose nib. Then I put the other side of the quick connect adapter on a new 100' hose.

Now I can easily drain the tank (large quantities). For smaller water changes I'd just use the MaxiJet 1200.

When my bigger pump gets here I'm hoping I can use this same contraption to pump water up from the basement; without opening the wall again... I'll just run the hose up the stairs from the buckets. Even if it's slow I don't mind. Better that than lugging 5G barrels (with 4G in them) up the stairs for ~150G. 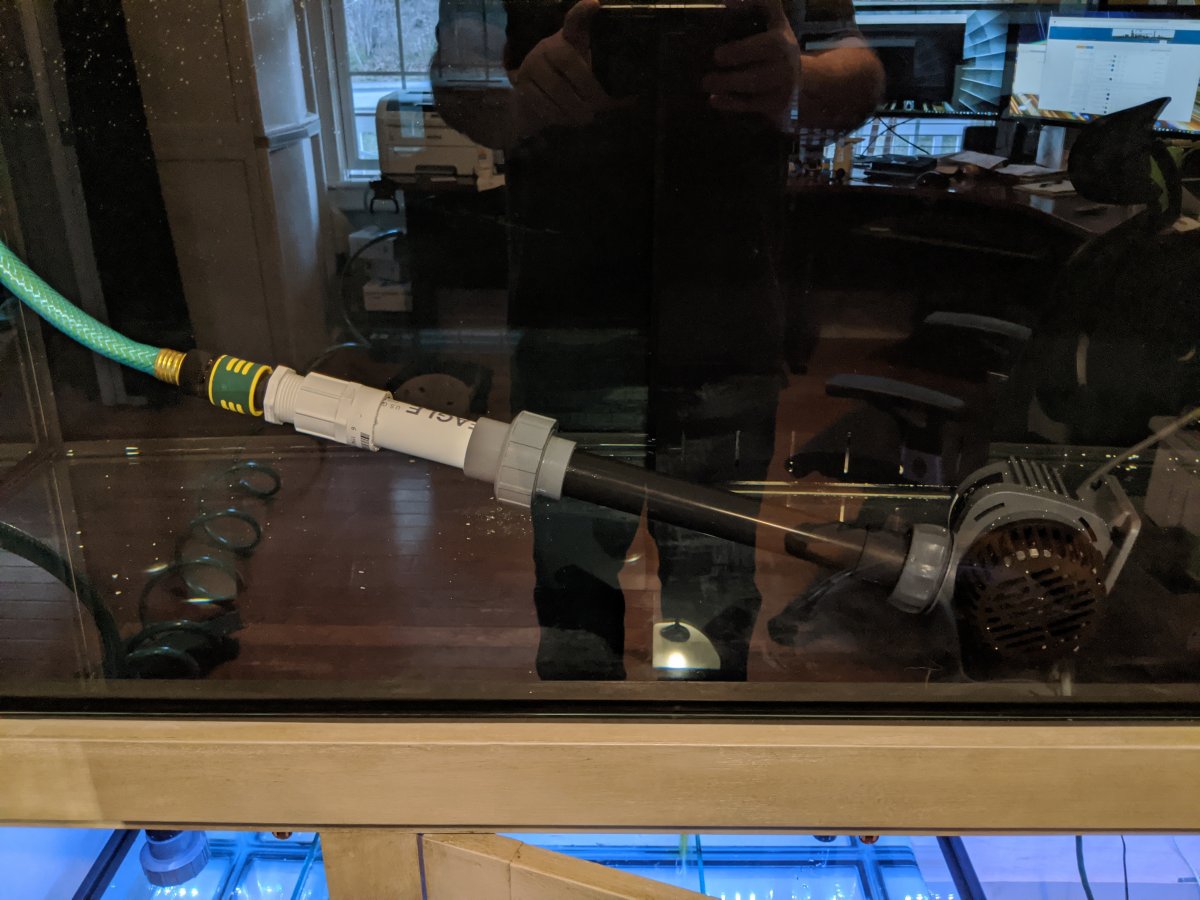 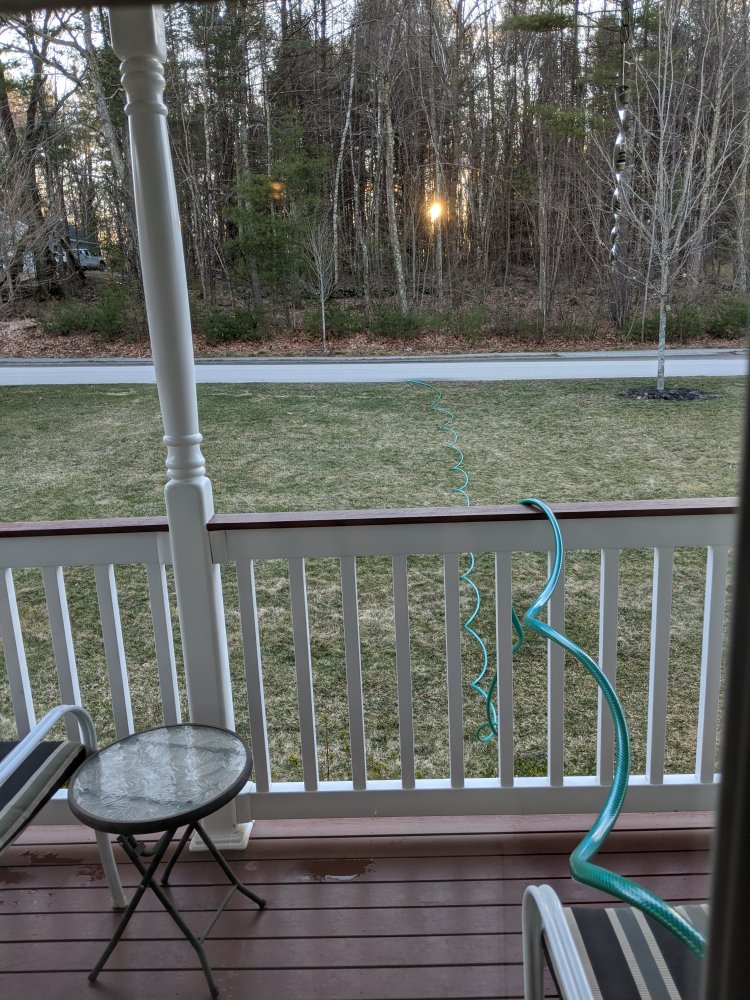 tired of chugging water up and down the stairs lol

FREAKINRICAN69 said:
Nice I’m going to have to makeshift something like this for now until we buy our own house lol

tired of chugging water up and down the stairs lol
Click to expand...

This is similar to what I did when I had the 100G sump (and more) in the basement. But then I had it hooked to a Wye in my drain line... I could flip a valve and direct the water to the hose which I ran out to the woods. I'm on septic so I didn't want to put it all in there.

Saved me from lugging buckets across the back yard.

BRS Member
Drained the tank/sump yesterday and wiped both down today. Last night I installed an 8-outlet DJ power strip (think I won this back at one of the BRS meetings years ago).

Tonight I ran the wiring for the pump, wave makers, lights etc. Then I setup the rockscape. It was difficult to translate my test 'scape from the basement to the tank, so I gave up trying. I kinda like how this came out. Lots of caves, ledges, swim ways, etc.

Next up I'll rinse out the sand and put it in.

Waiting on my new DC pump to arrive; hopefully it's go enough power to pump water up from the basement through the hose and FRANKEN DRAIN. 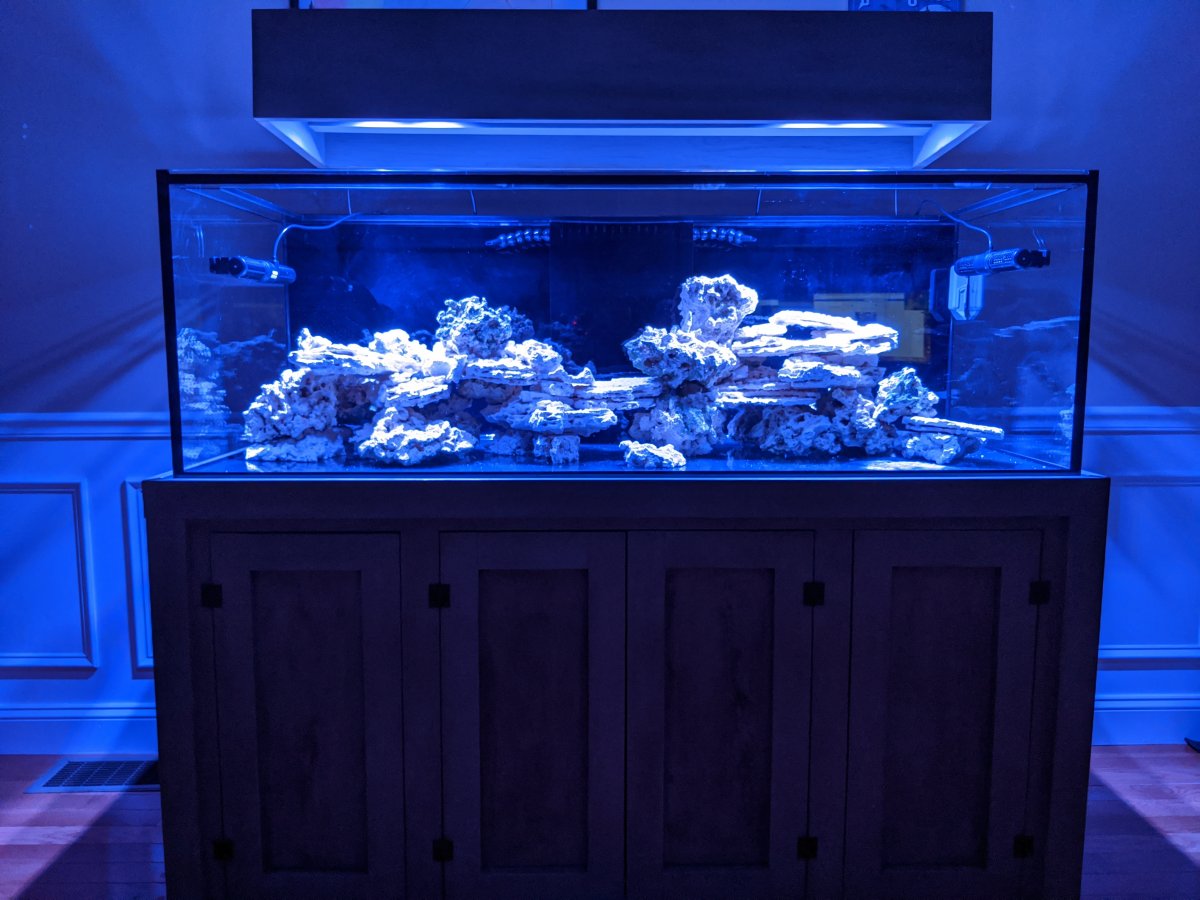 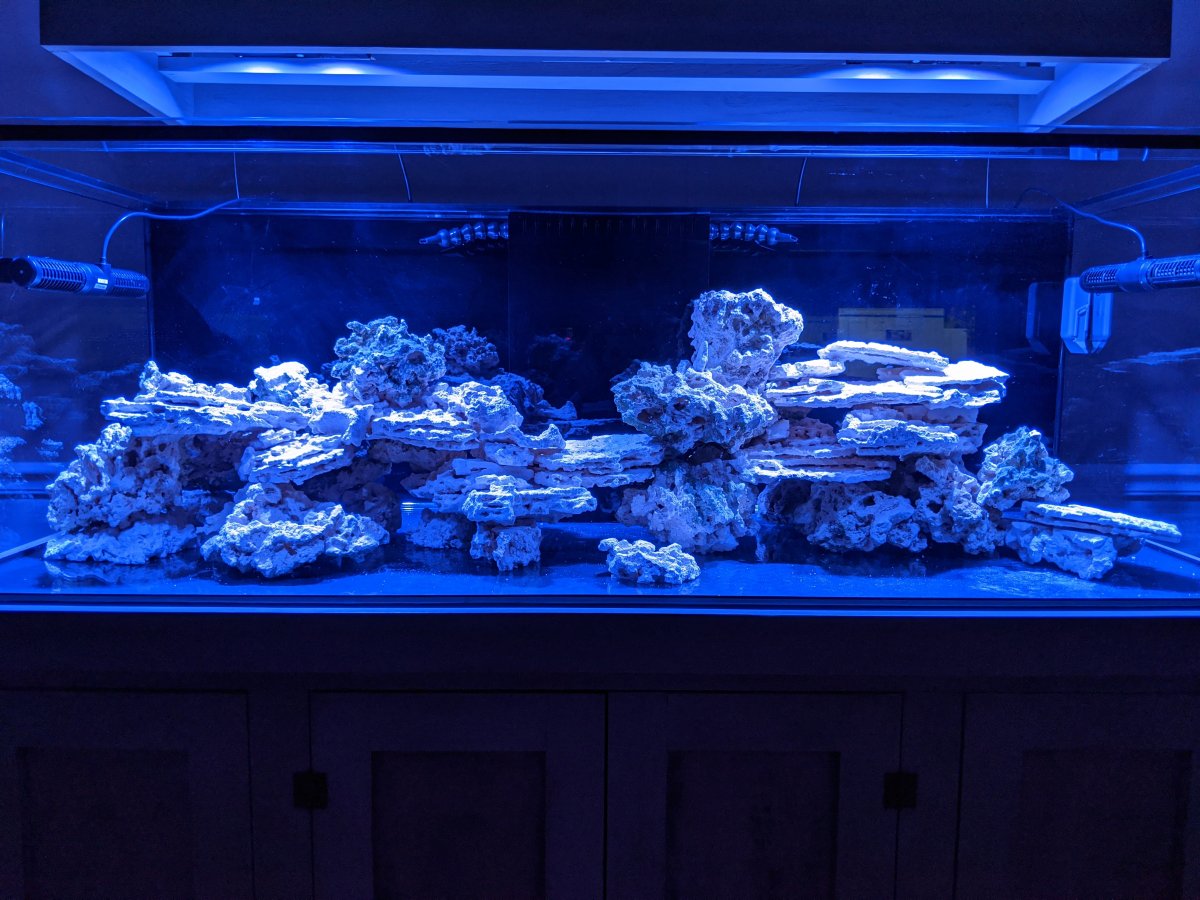 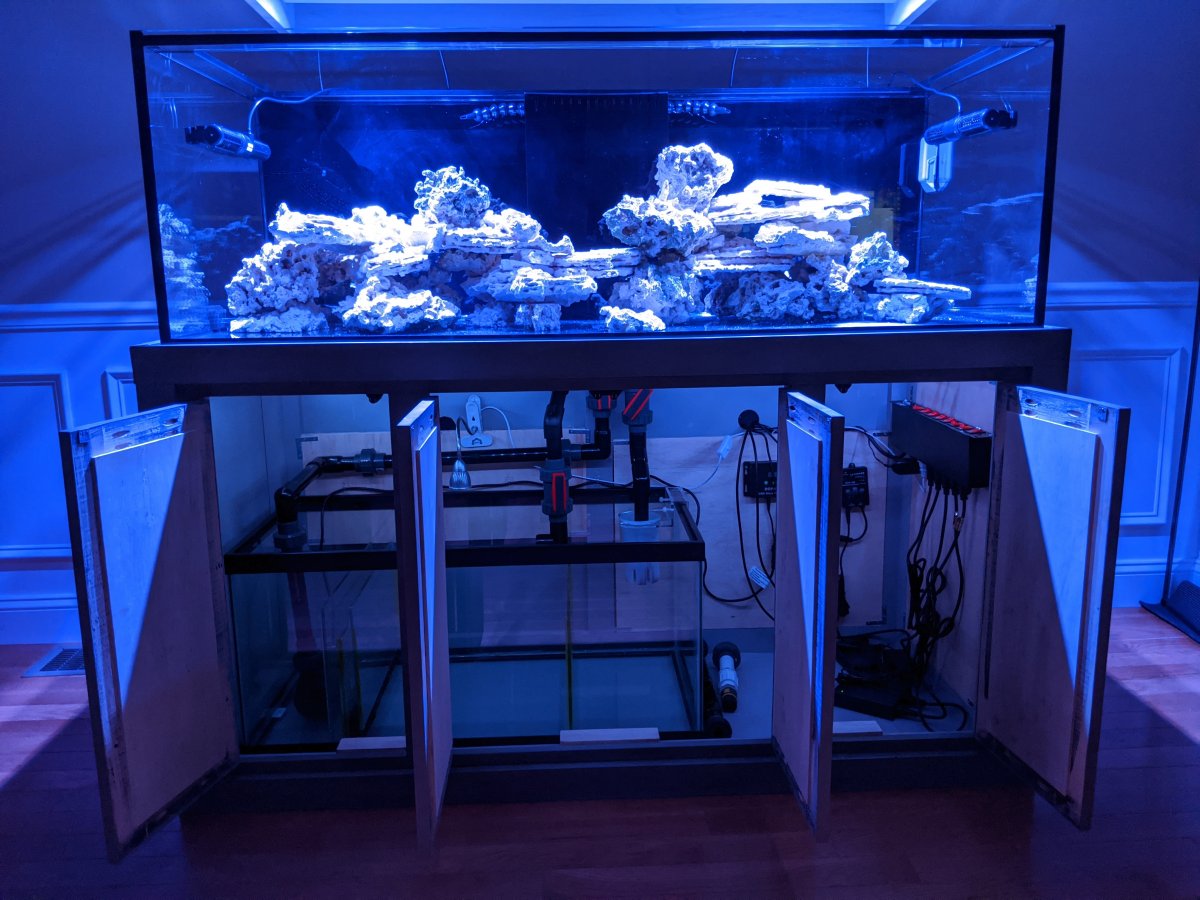 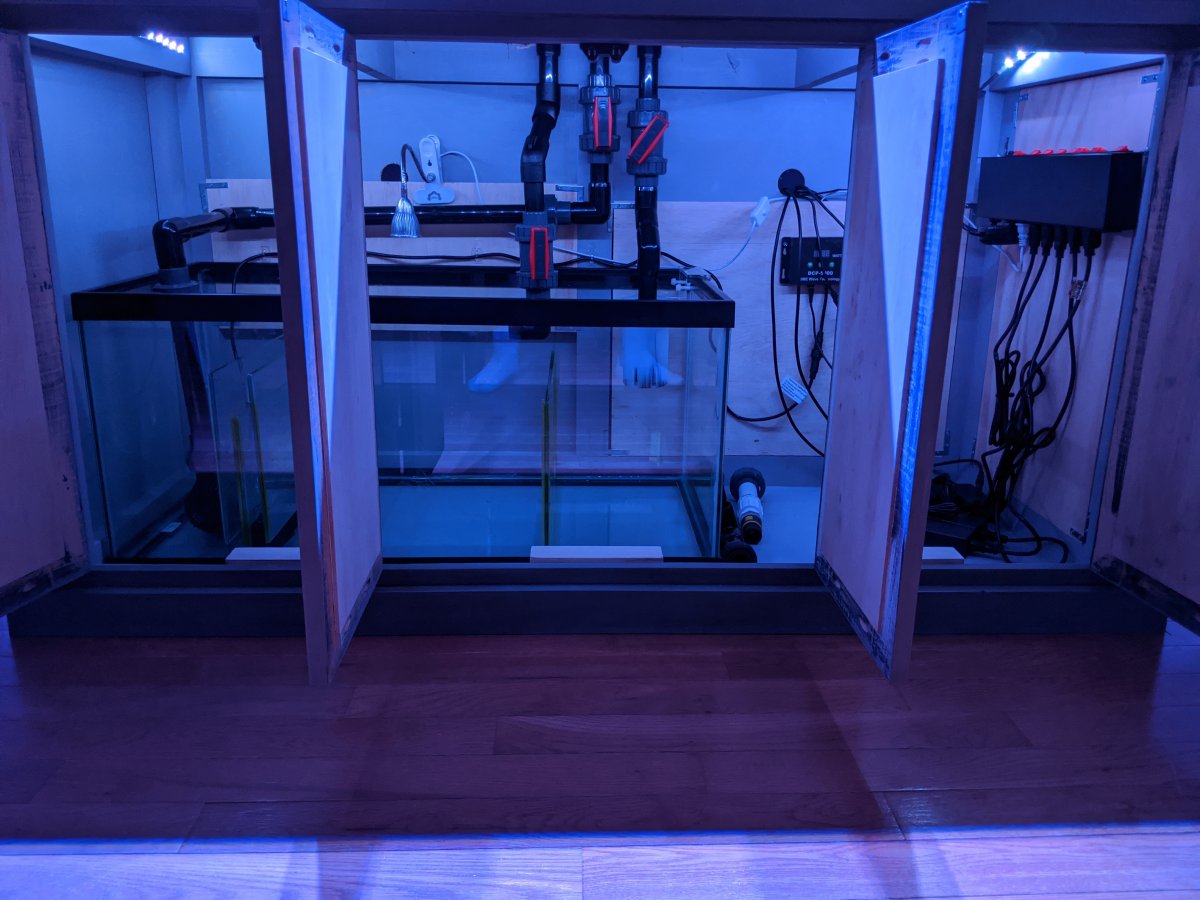 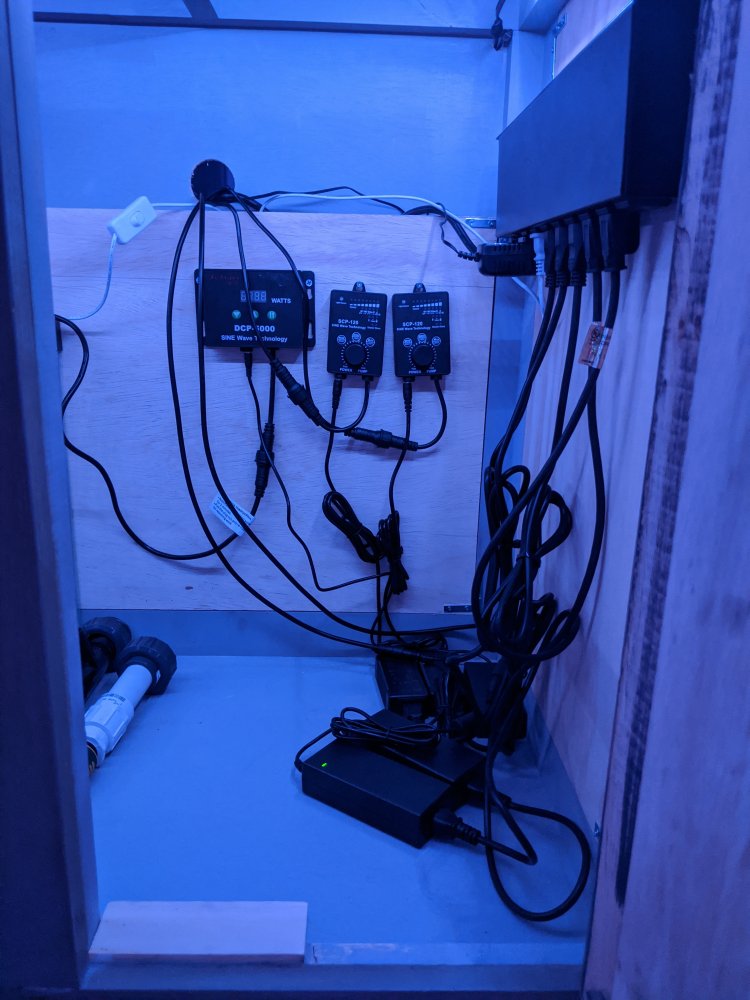 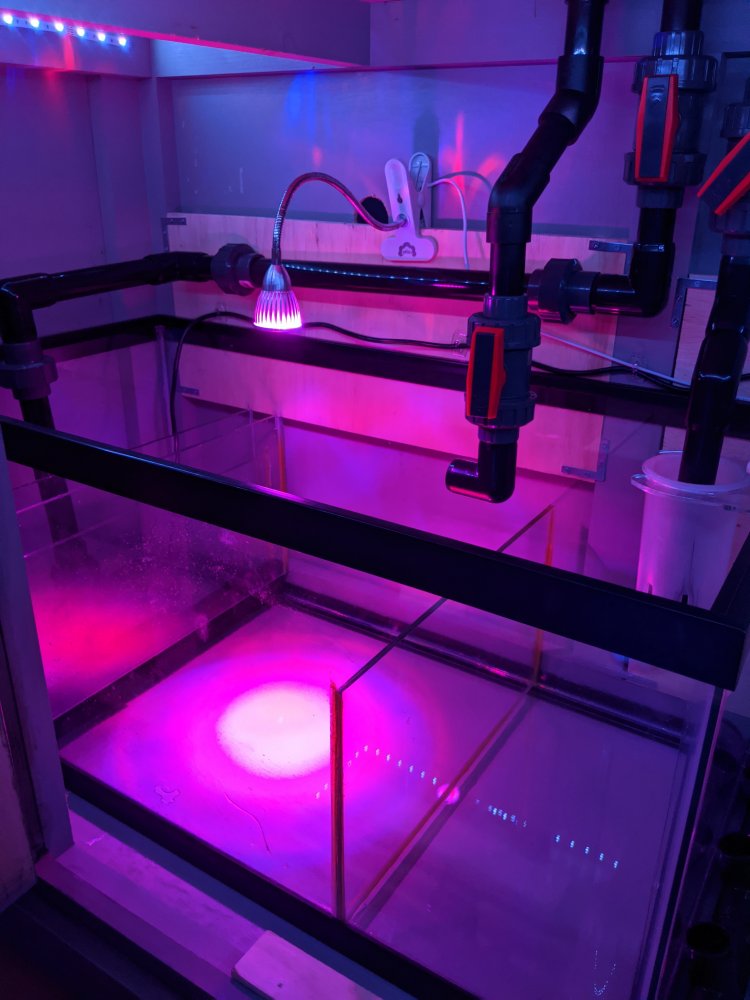 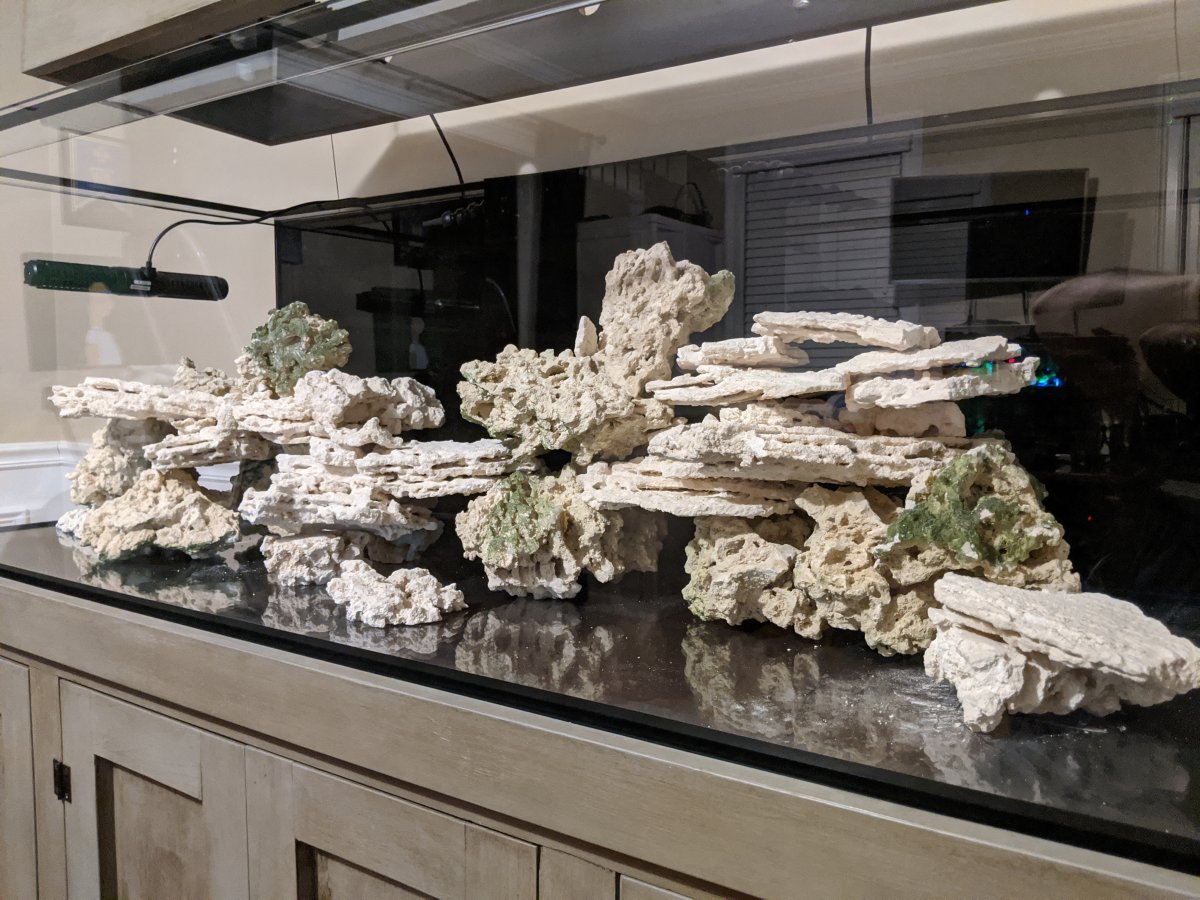 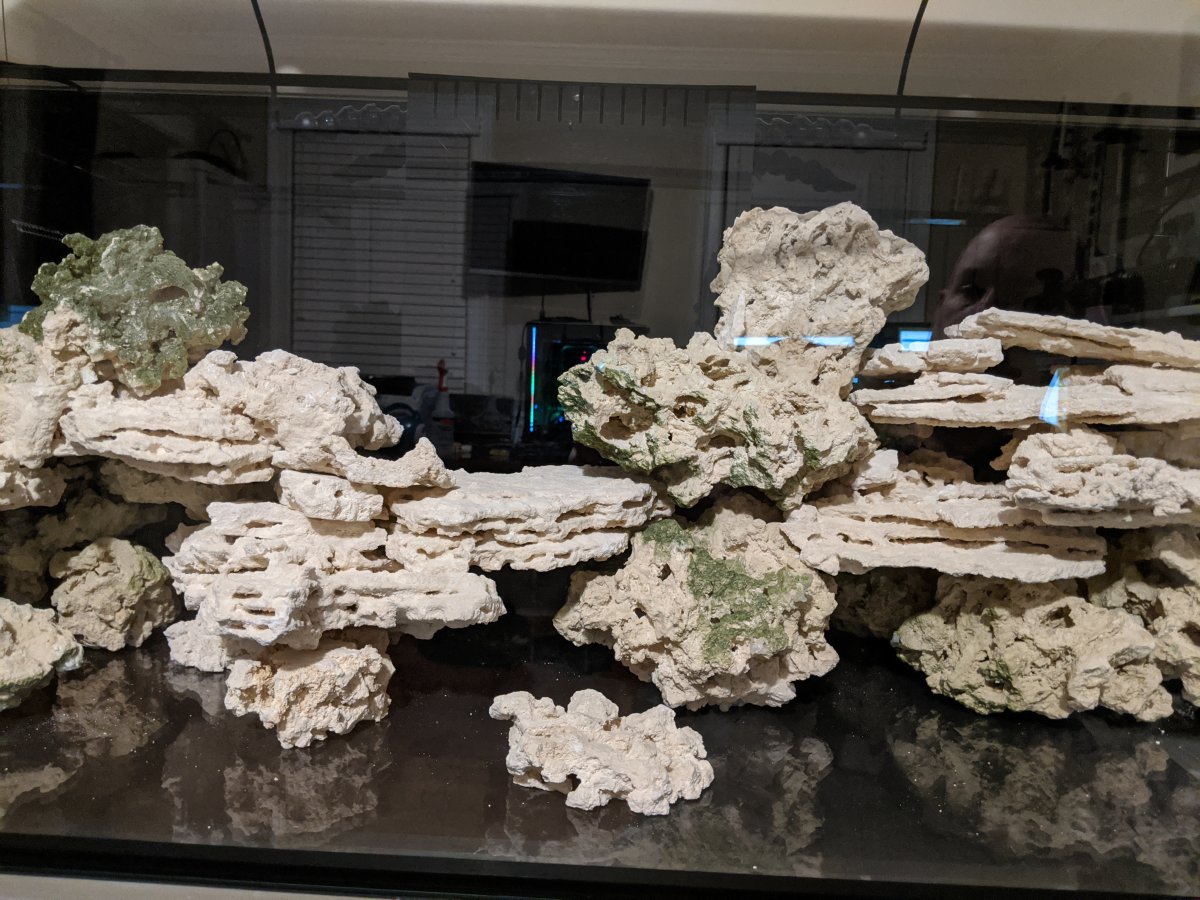 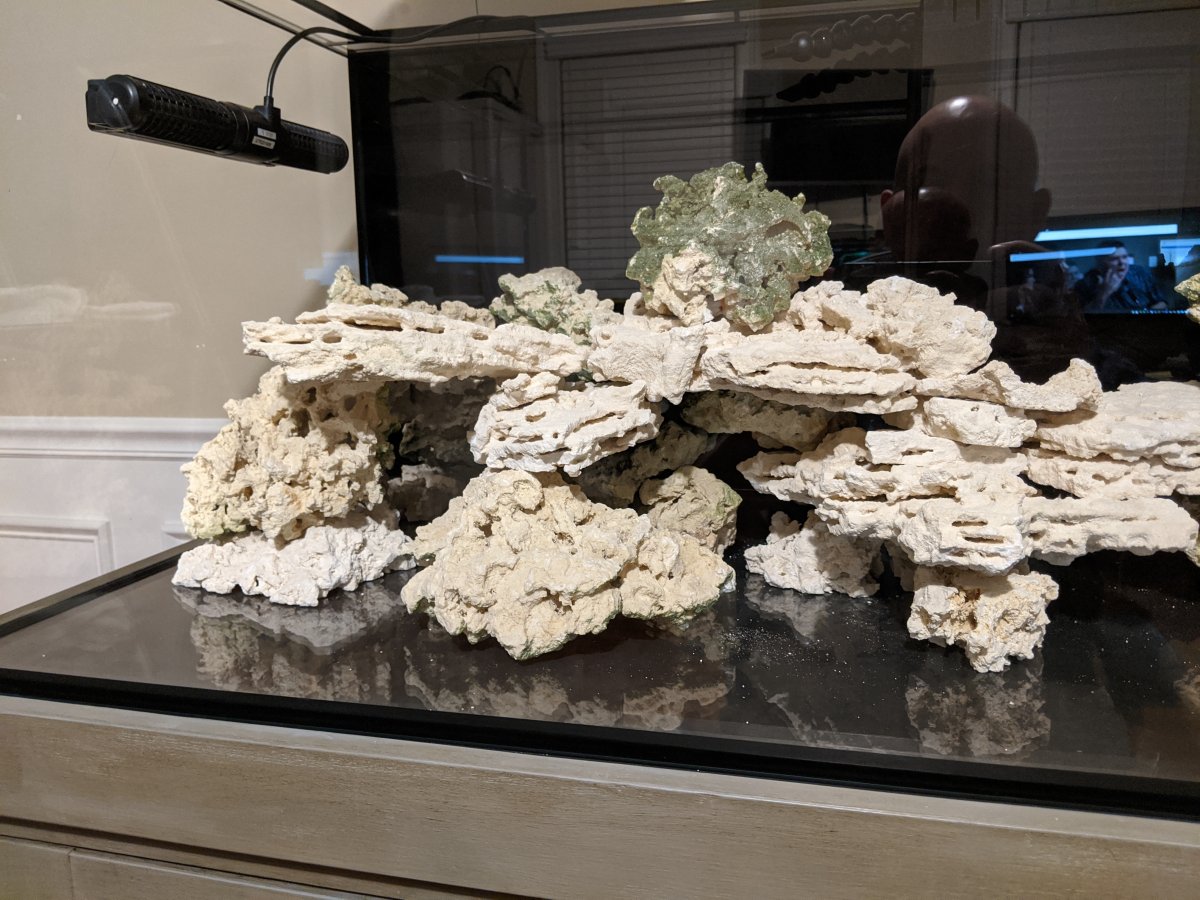 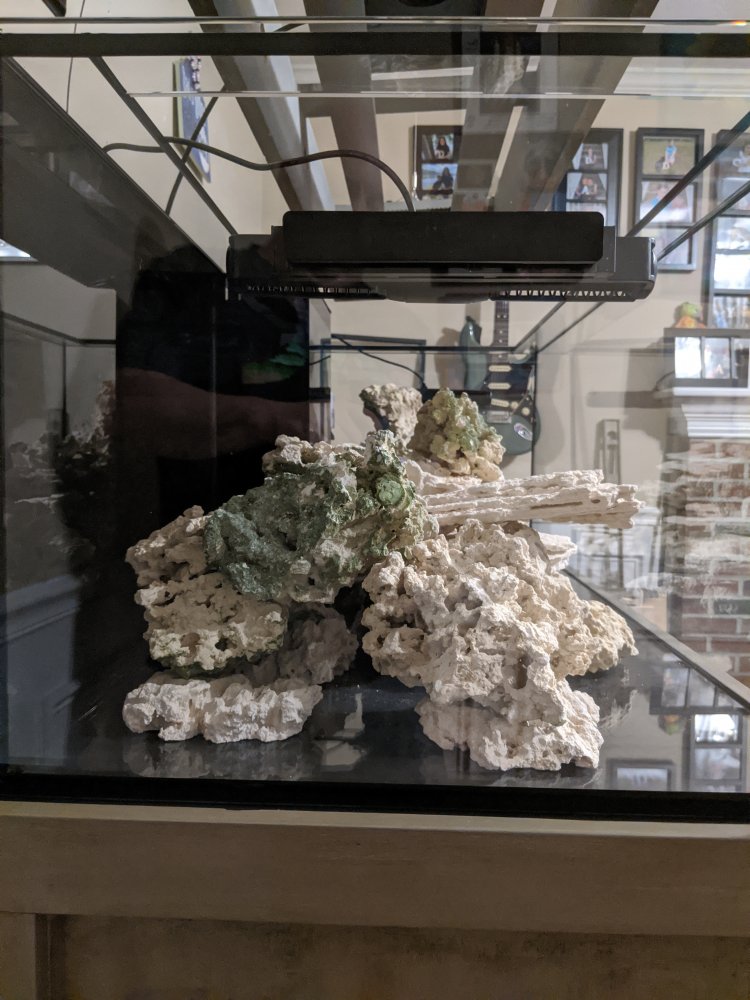 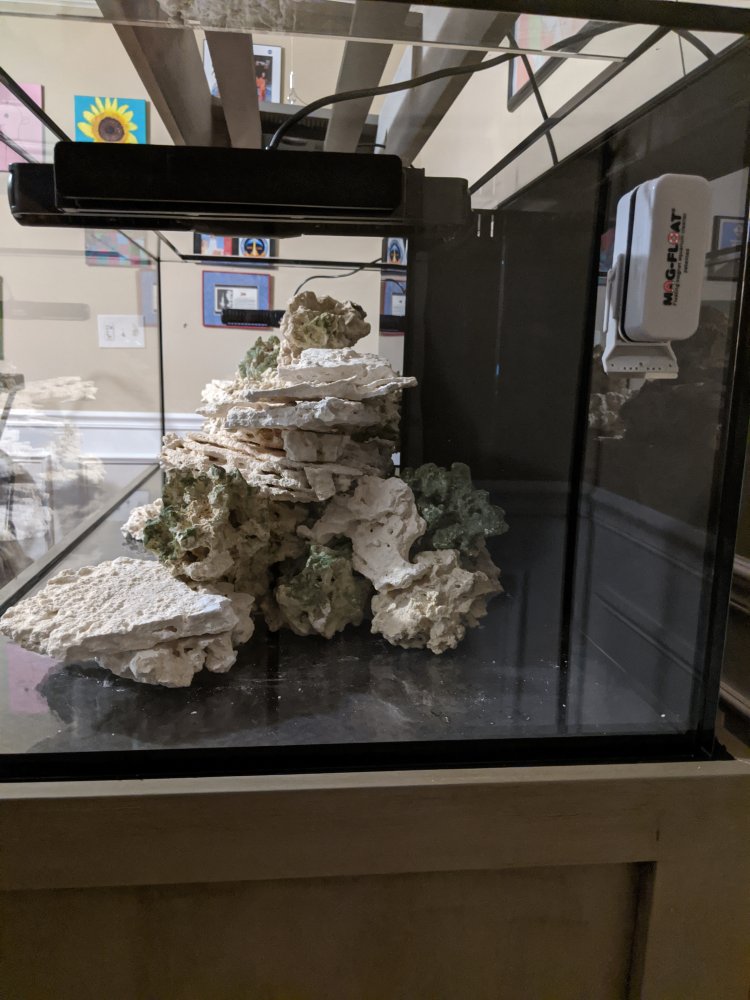 BRS Member
This morning the X-family, minus MrsX (she still has to drive to work at the office), rinsed out the sand that came with the tank. After lunch I brought it in and spread it around the tank.

The new CoralBox 120000 pump won't be here until next week, and I'm impatient, so tonight with SonX's help I lugged ~140G of water up from the basement. SonX was in charge of filling buckets in the basement with the MJ1200 as I lugged them upstairs.

Amazingly, my asthma/breathing issues (no, not corona) didn't kick in until I was done and sat down.

SonX and DaughterX took turns dumping salt into the tank. Figured the wave pumps and return pump would do a swell job mixing it up for us.

Everything's quite cloudy from the salt. Should be cleared/dissolved by tomorrow. I don't have the heater in there yet, so it might be a little slower.

Will swing by Petco/Market Basket to get some denitrifying bacteria and a shrimp or two to get this cycle going. 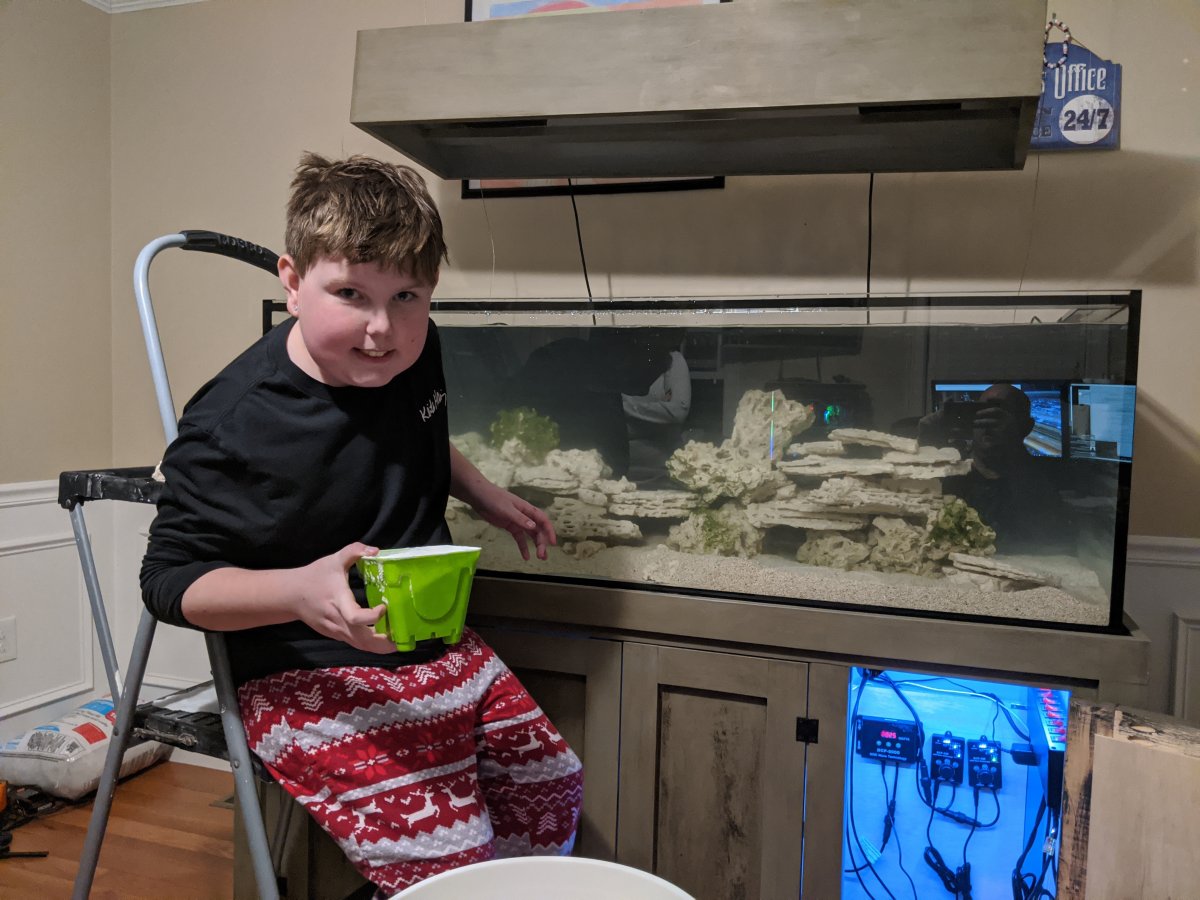 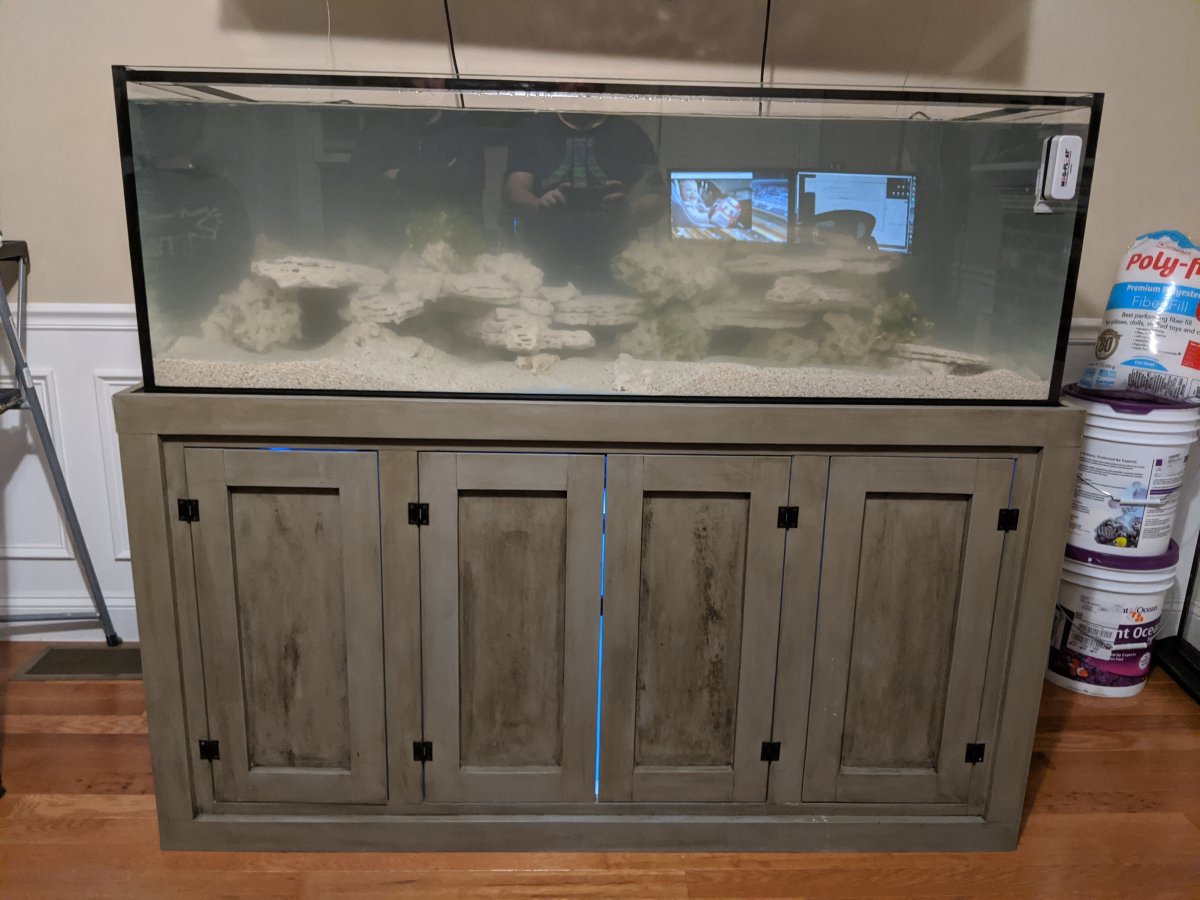 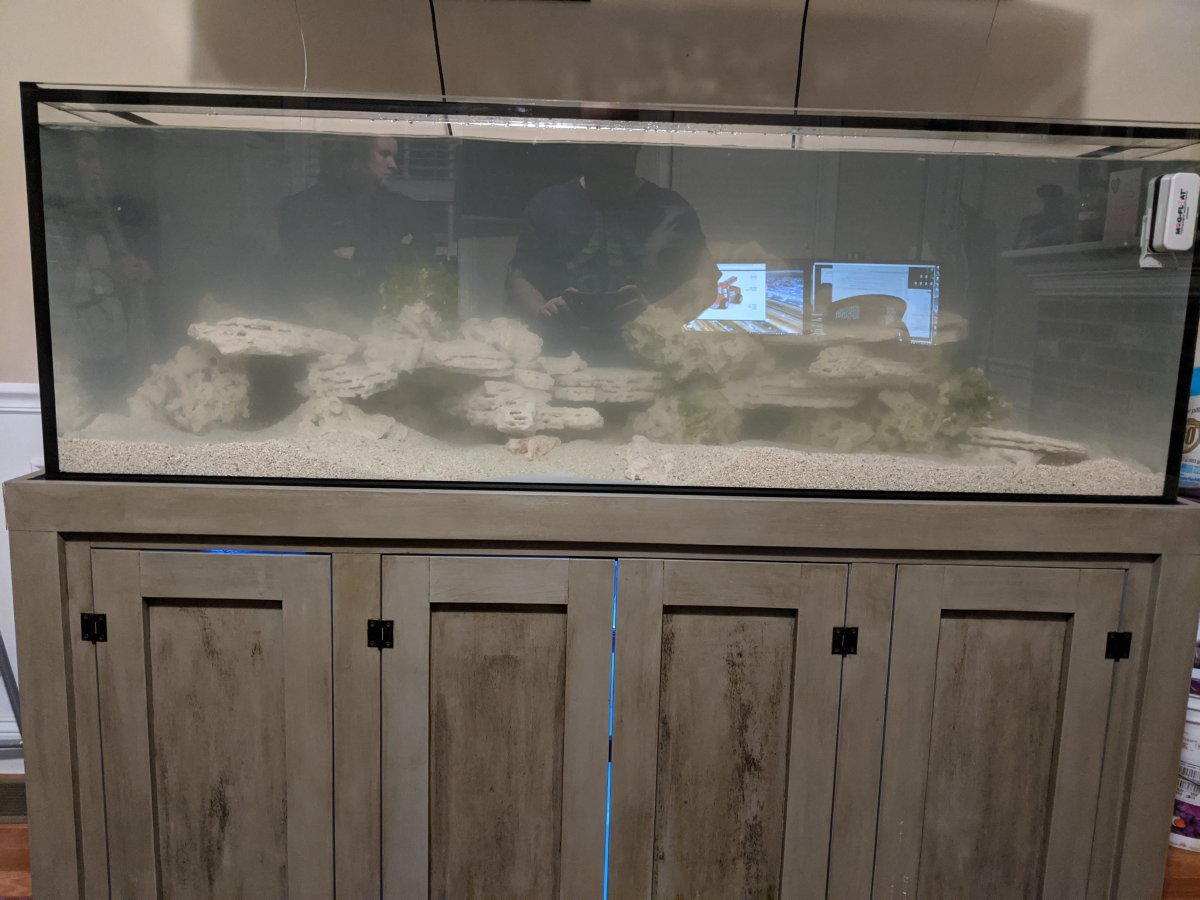 BRS Member
Here's an old picture, from almost 8 years ago exactly (March 13, 2012), of SonX helping me with the first saltwater tank we ever had. We filled this one differently from the first time around, so the picture is a little different. 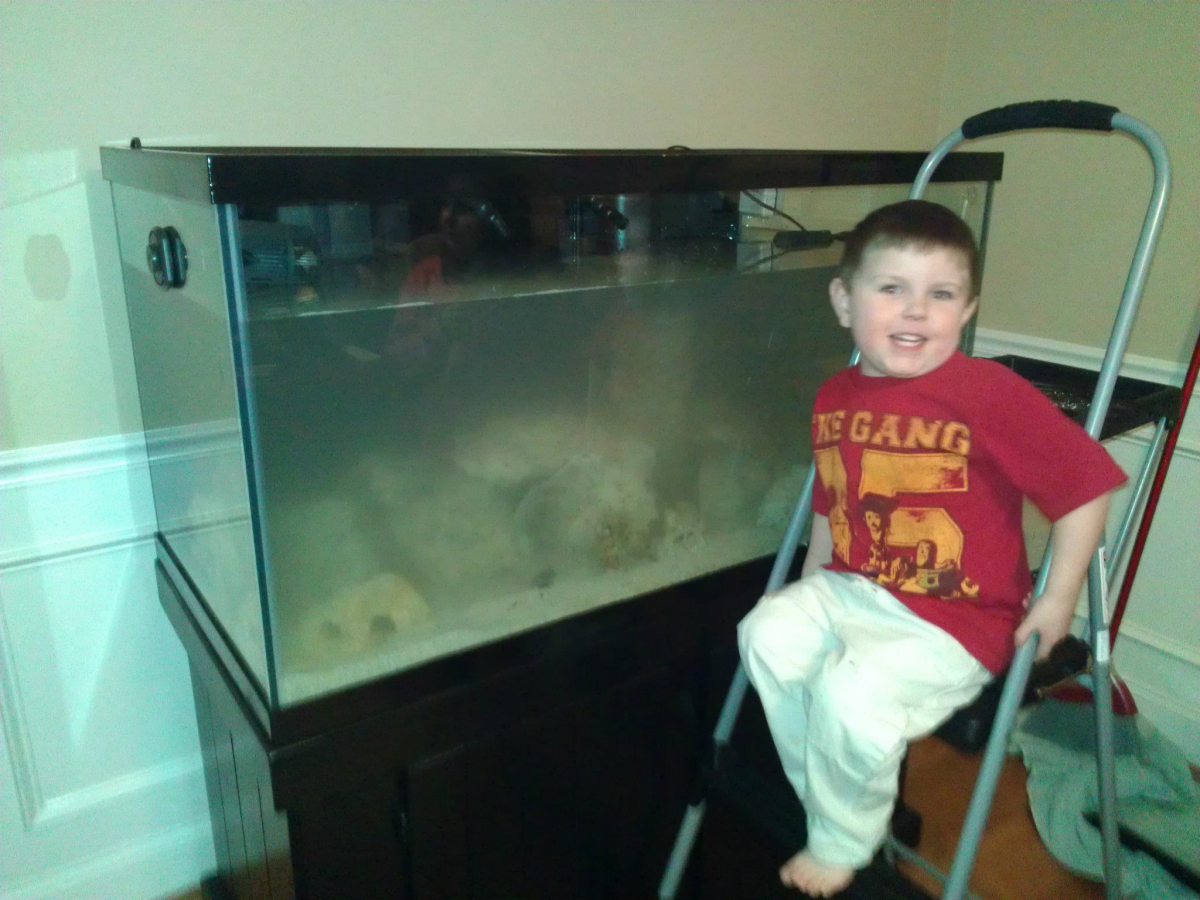 April Meeting Cancelled Due to COVID-19