Howdy,
Welcome to another new chapter of Nick Liu's build thread. lol. Hopefully, this one will be up longer than the 3 years on the last Miracle build. The last tank build can be found here. And the prior tank is somewhere in that thread. I think it's toward the end.

It's time to start a build thread for this. The building and electrical inspectors just walked out the door and we are now ready for the 2nd phase. You can call this Nick’s reef 3.0 since this is the 3rd serious tank upgrade. But this is something I called a Man-Cave or “In-Laws are Here” cave...

Long story short, we moved last September and there was no way I could deal with moving that 360G with a 10 month-old at the time. Besides, the 48" wide would be a challenge to fit in the new house. I kept what I can in my buddy's tank and sold all livestock but kept all the equipment since I knew I would be back. I kept the rocks outside for a couple months then pressure washed them and placed them in a Rubbermaid and ran a power head in early January. The new tank order was place in February through Miracle Aquarium(the same company who built the last tank) and sump through Advanced Acrylics(again, same cast of characters). Supposed to be 6-8 weeks lead time. Then we all know what caused the current situation and the tank didn't arrive until mid July. The sump arrived around the same time.

Lighting:
5xRadion G5. I have 7 at disposable but hoping to use 5 on DT and 2 on frag tank
I have bought a Geisemann Stellar Hybrid but I'm not sure I'll use the T5s. Been running the G5s for over a month in my temporary/frag tank and I don't think I will need the T5s. It's there if I need it.

That's all the main equipment. Now lets get to the fun stuff.

First thing first, I gotta make sure the floor is ready for 4000lbs+ of dead weight. Main joists are sistered with 3/4" plywood and 2x12s where the tank will sit. Then supported by 4x2x6 beams and a minmum of 12,000lbs each jack post. 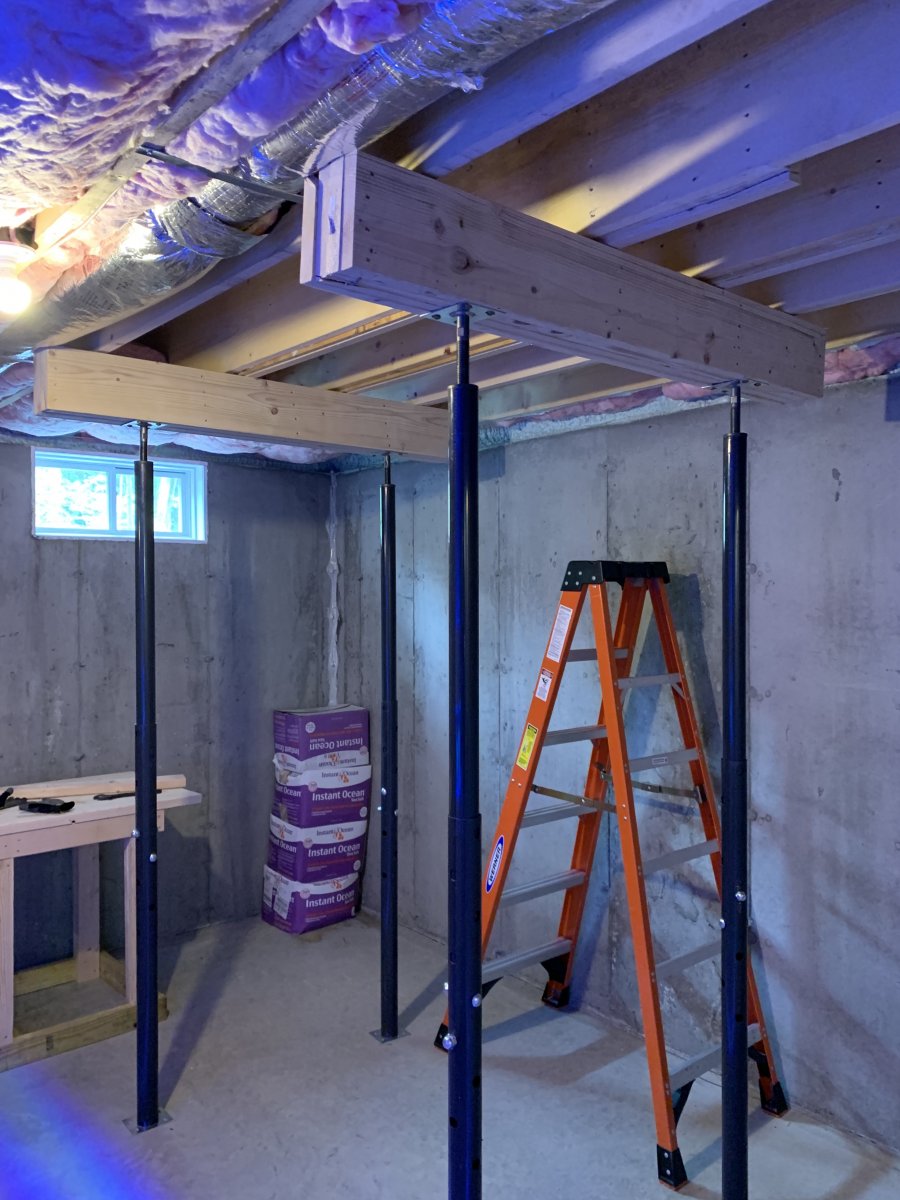 Tank and stand arrived from Miracle 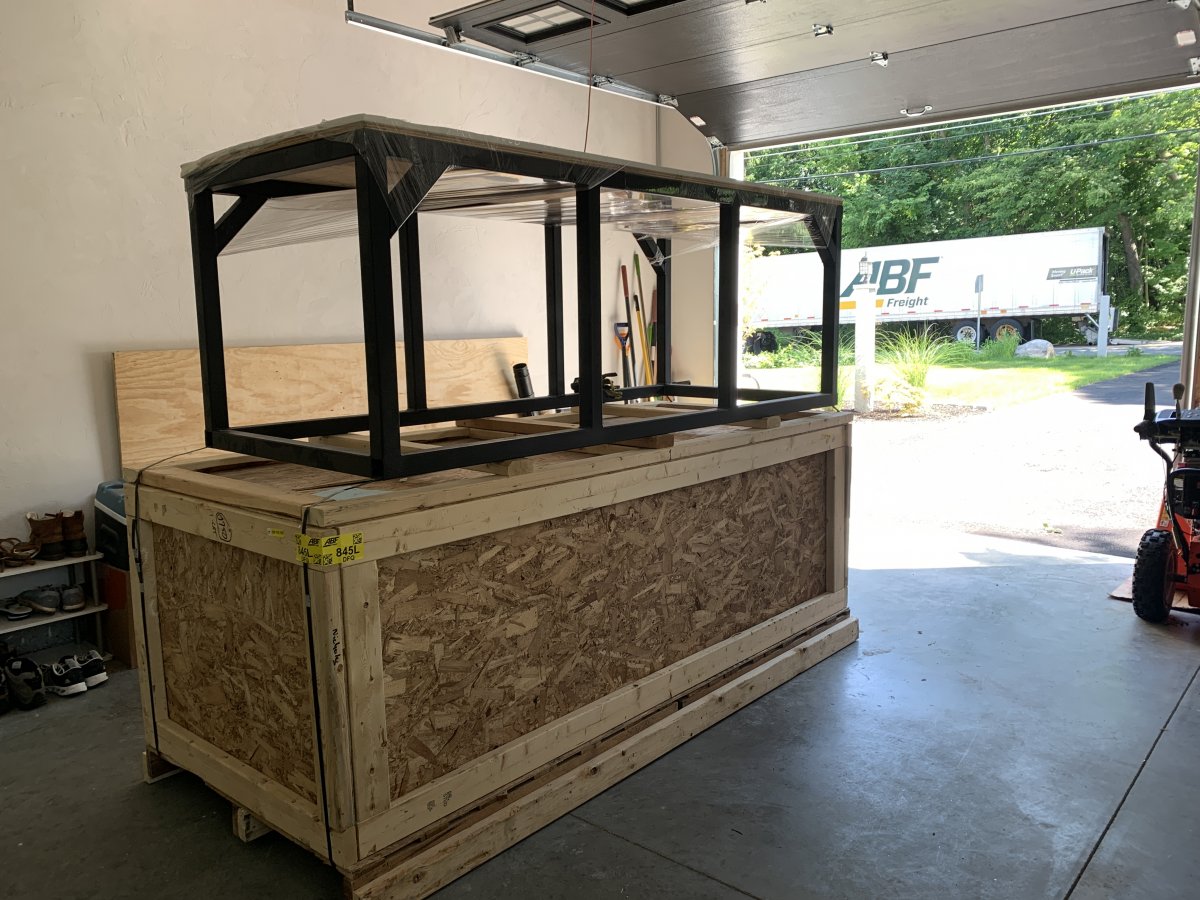 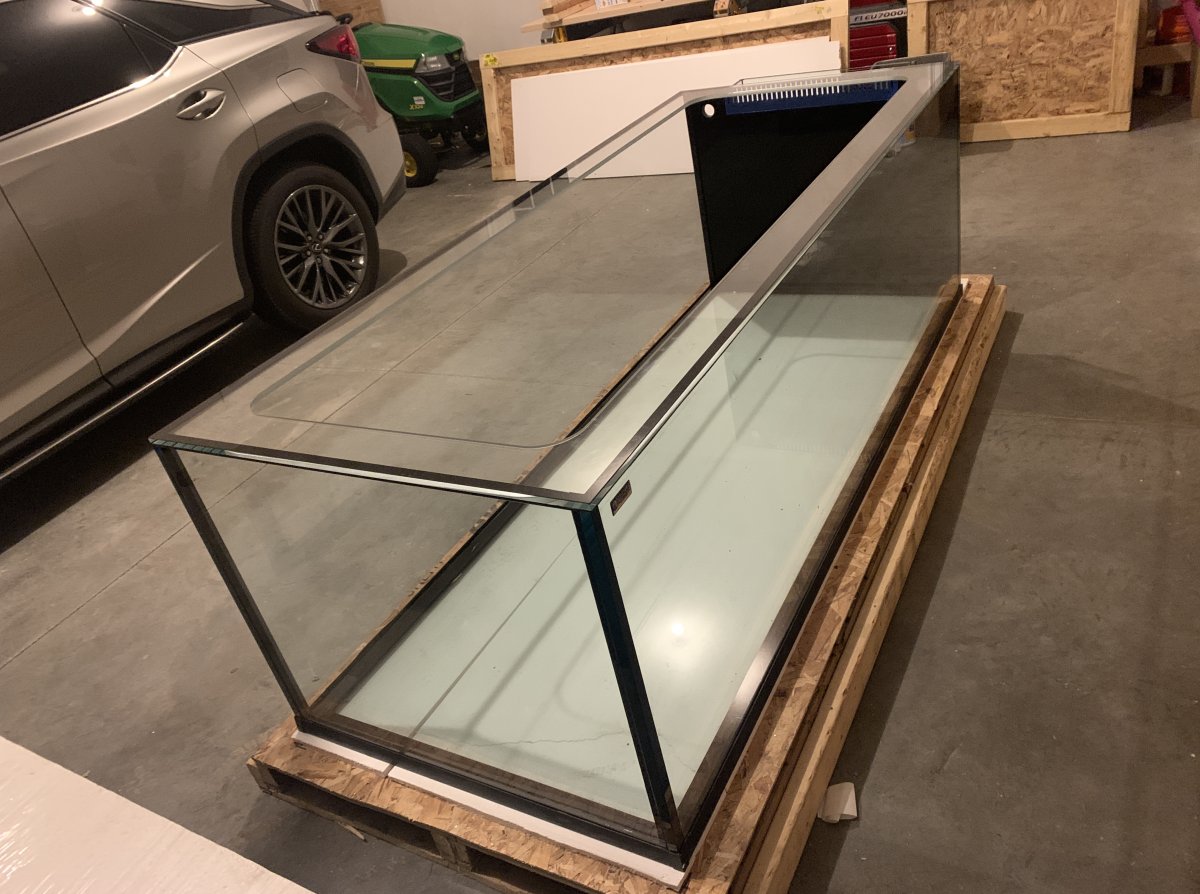 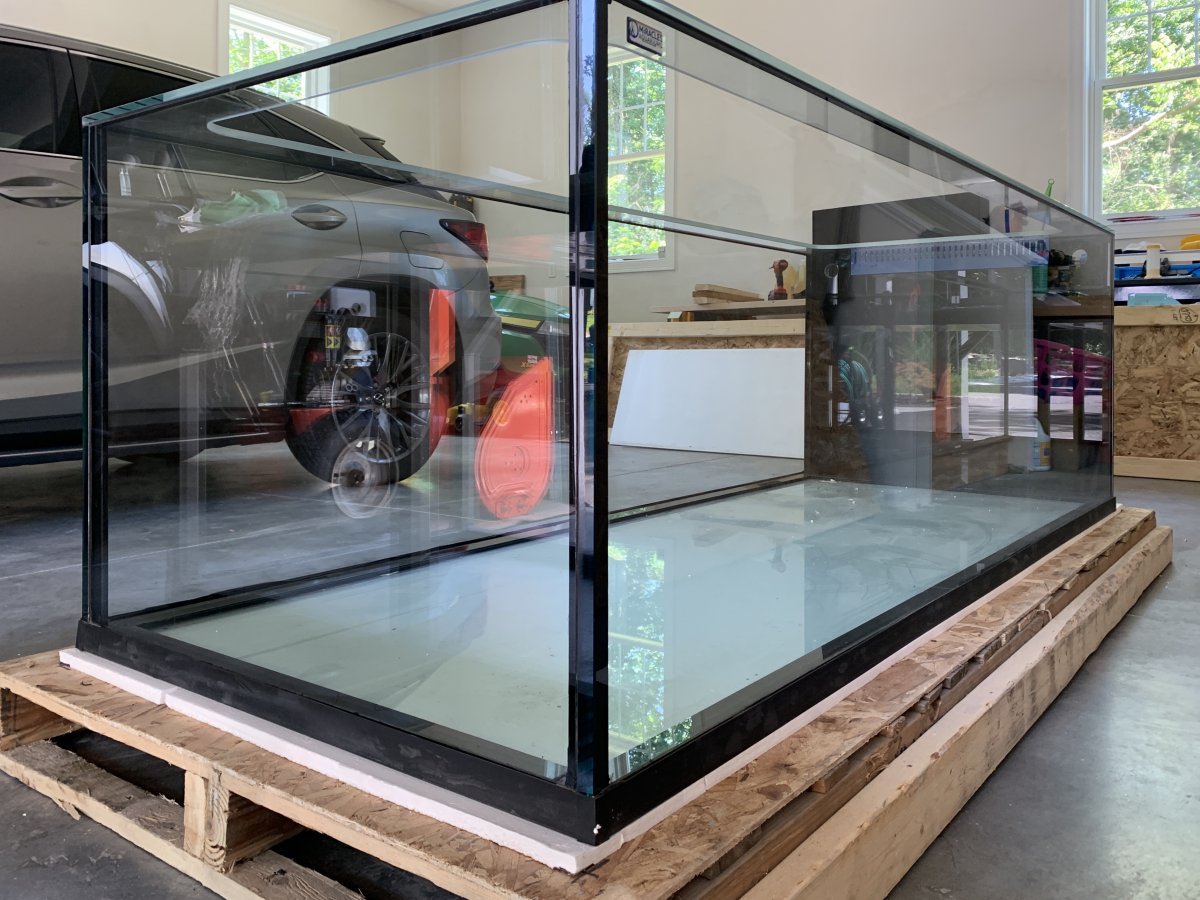 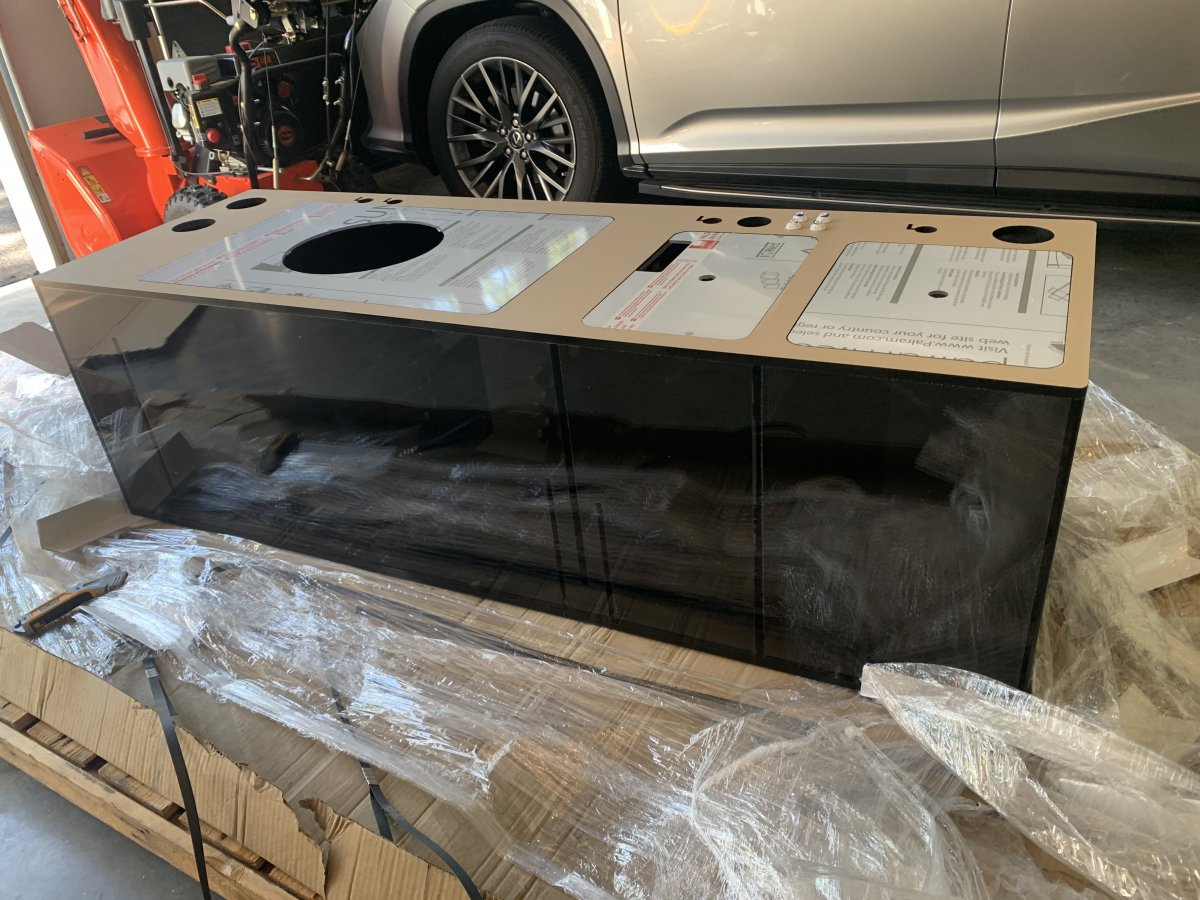 With the tremendous help from 6 friends, tank and stand were moved in last weekend 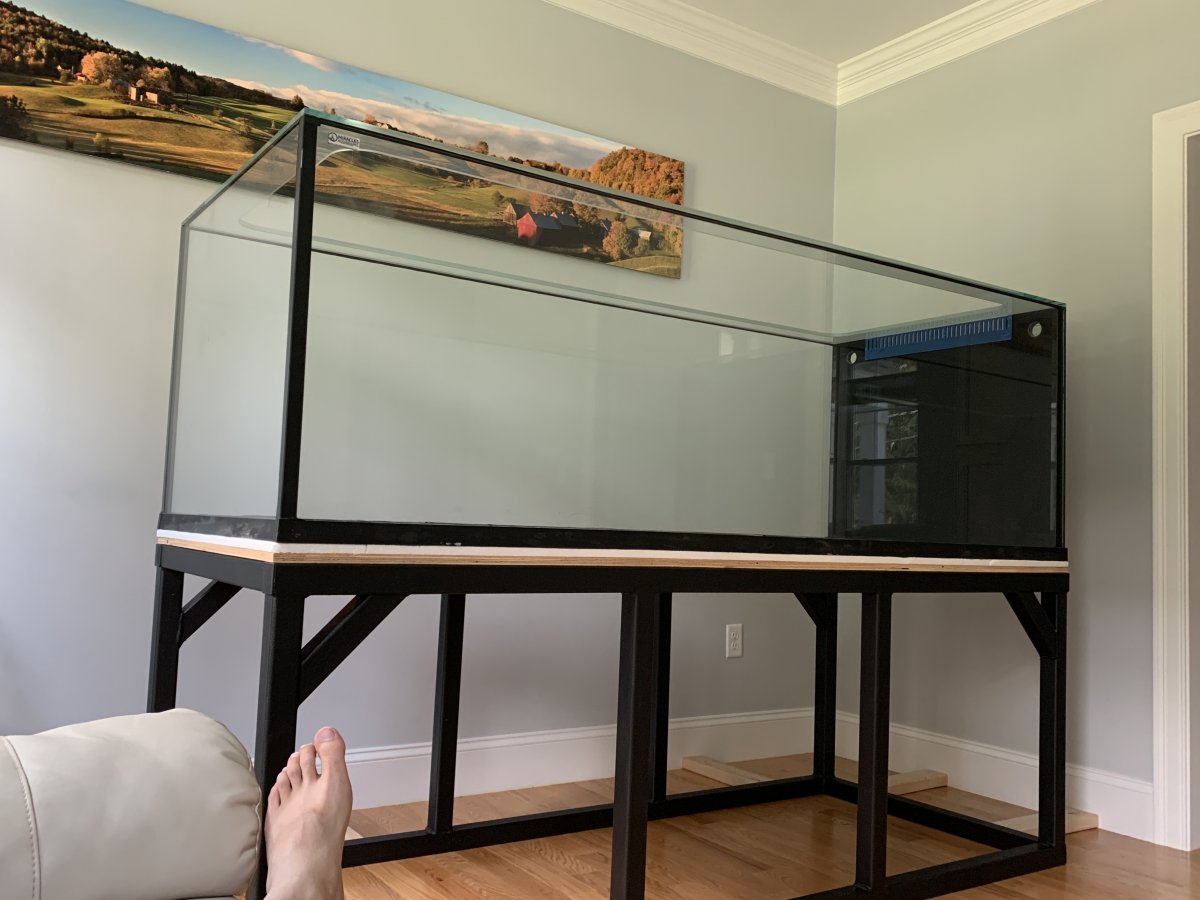 I had to level the tank before filling it up and without any help, it's impossible to shim an 800lbs tank myself. Went to Lowes and got a jack post and rig this up. Allows me to jack the tank safely til leveled and shim it correctly. 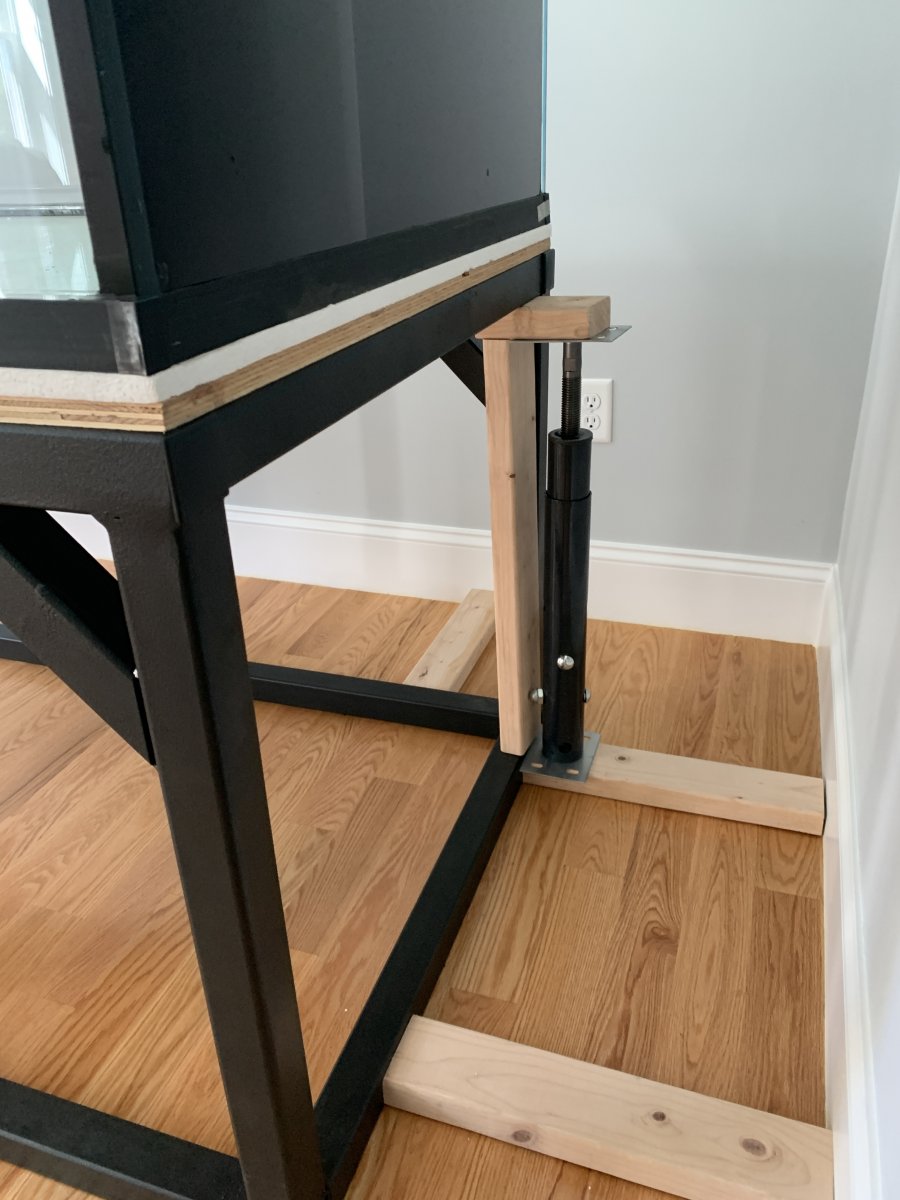 Composite shims were used in the corner that needed it. 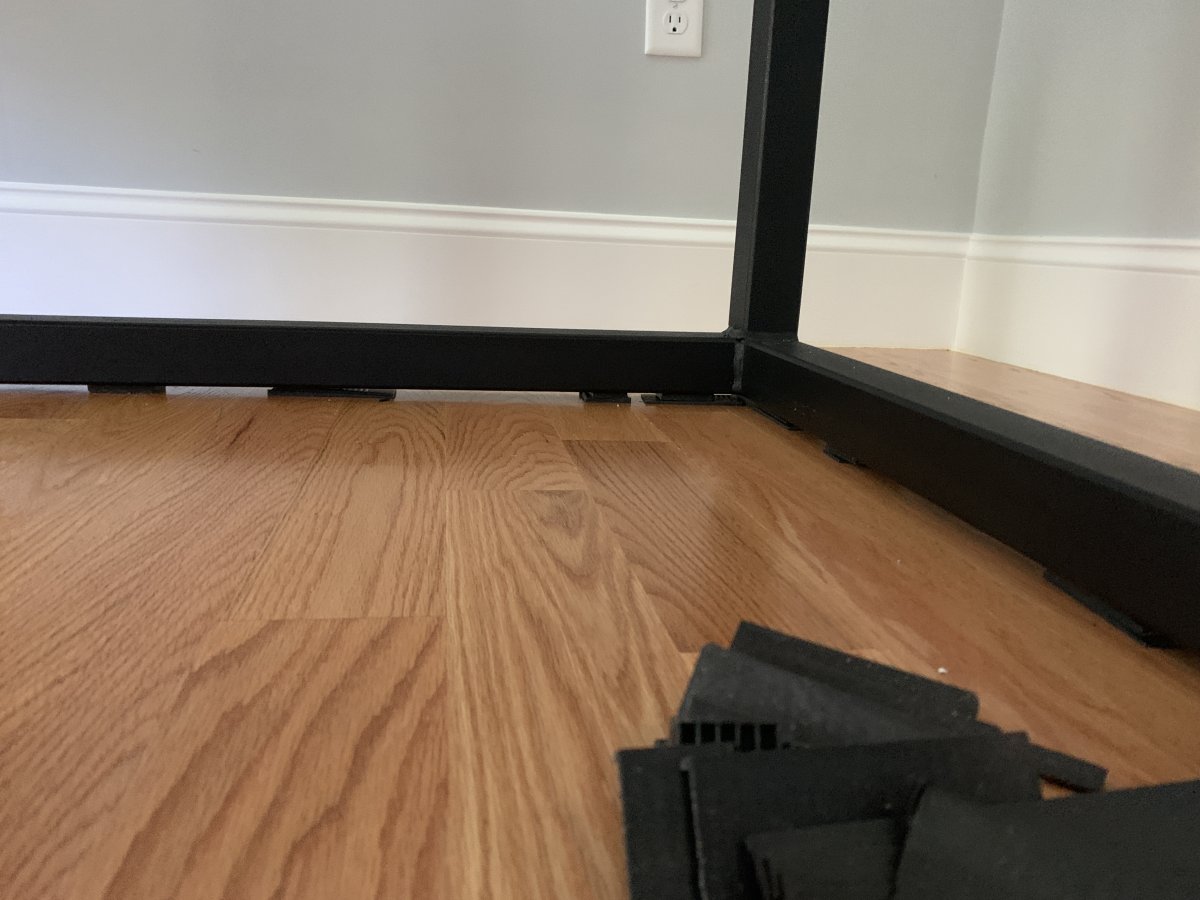 Now it's ready to fill. 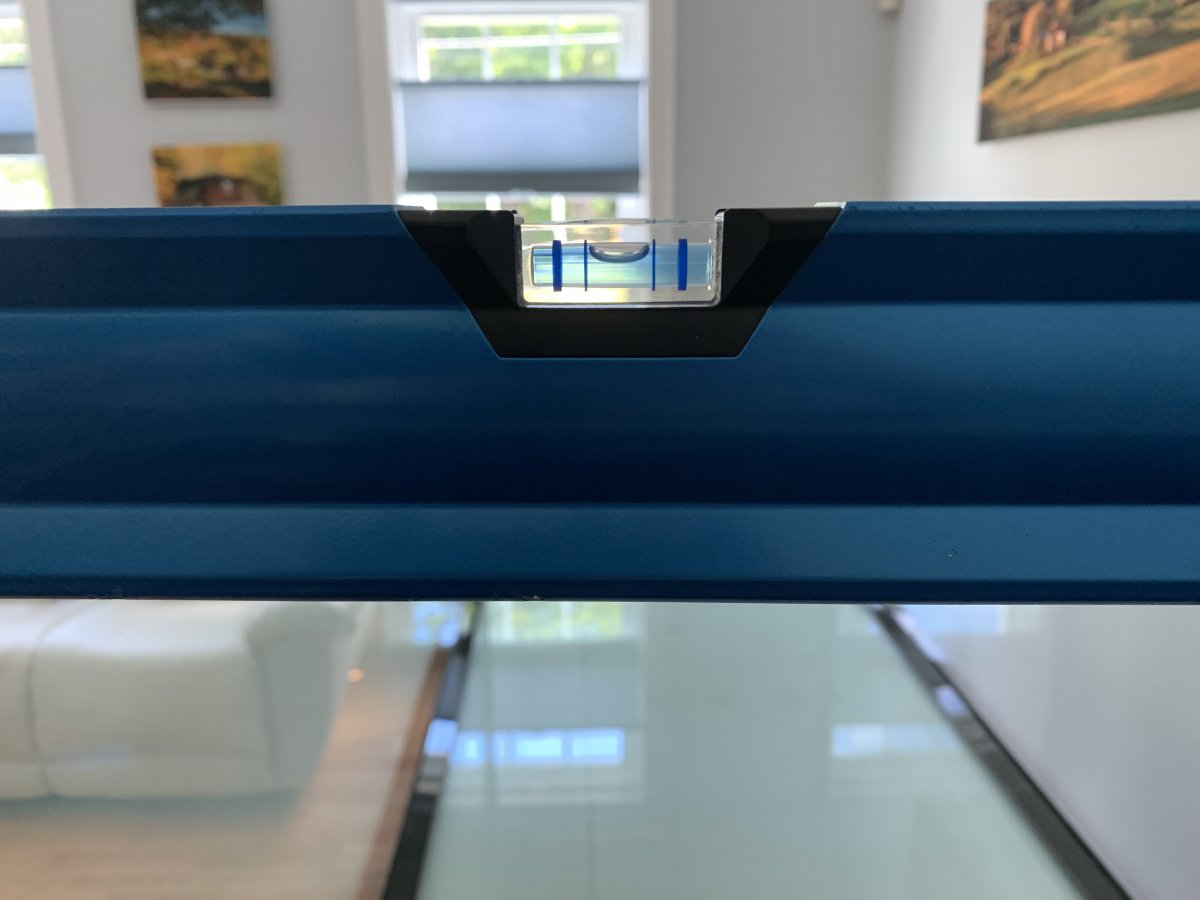 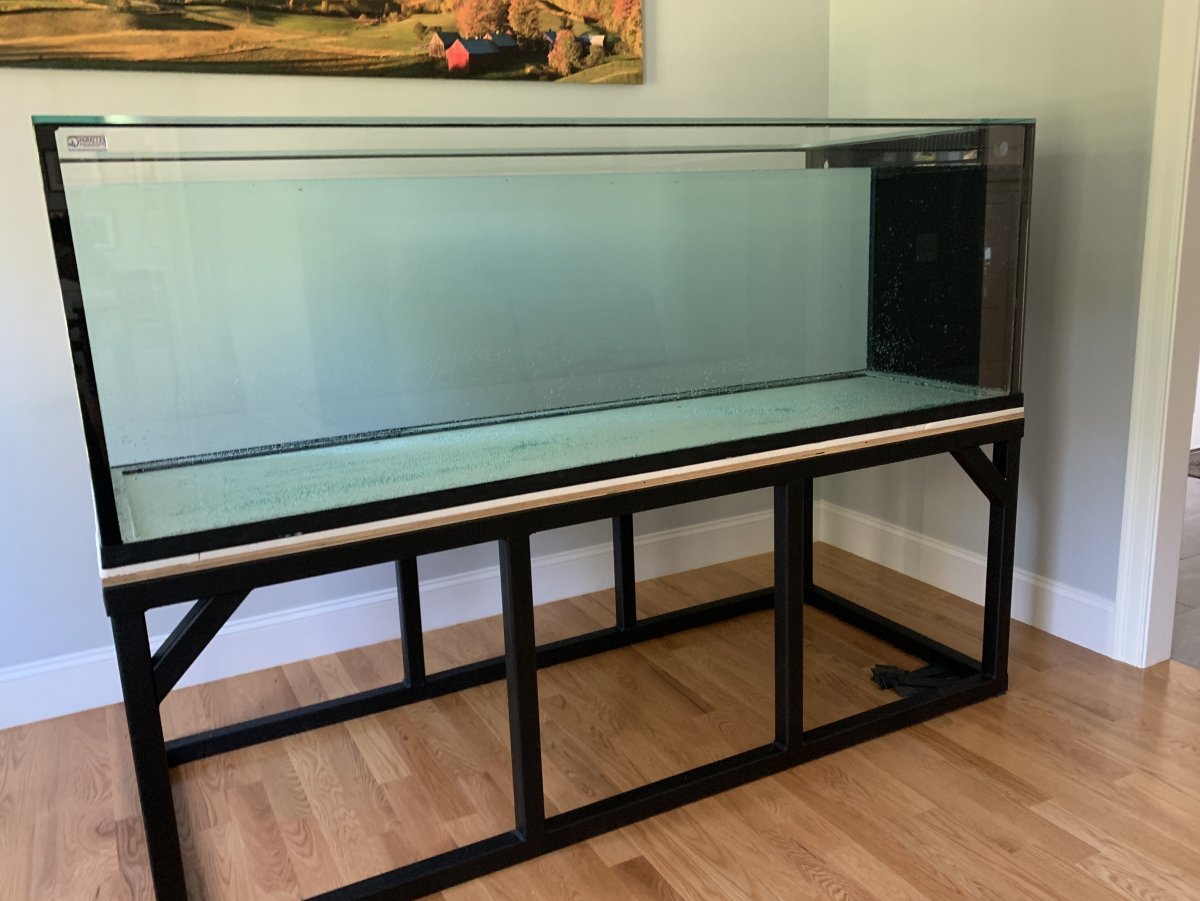 I had to take this out. I don't mind a small engraving in the corner of the glass somewhere but this is too much. I moved it to the overflow for future reference. 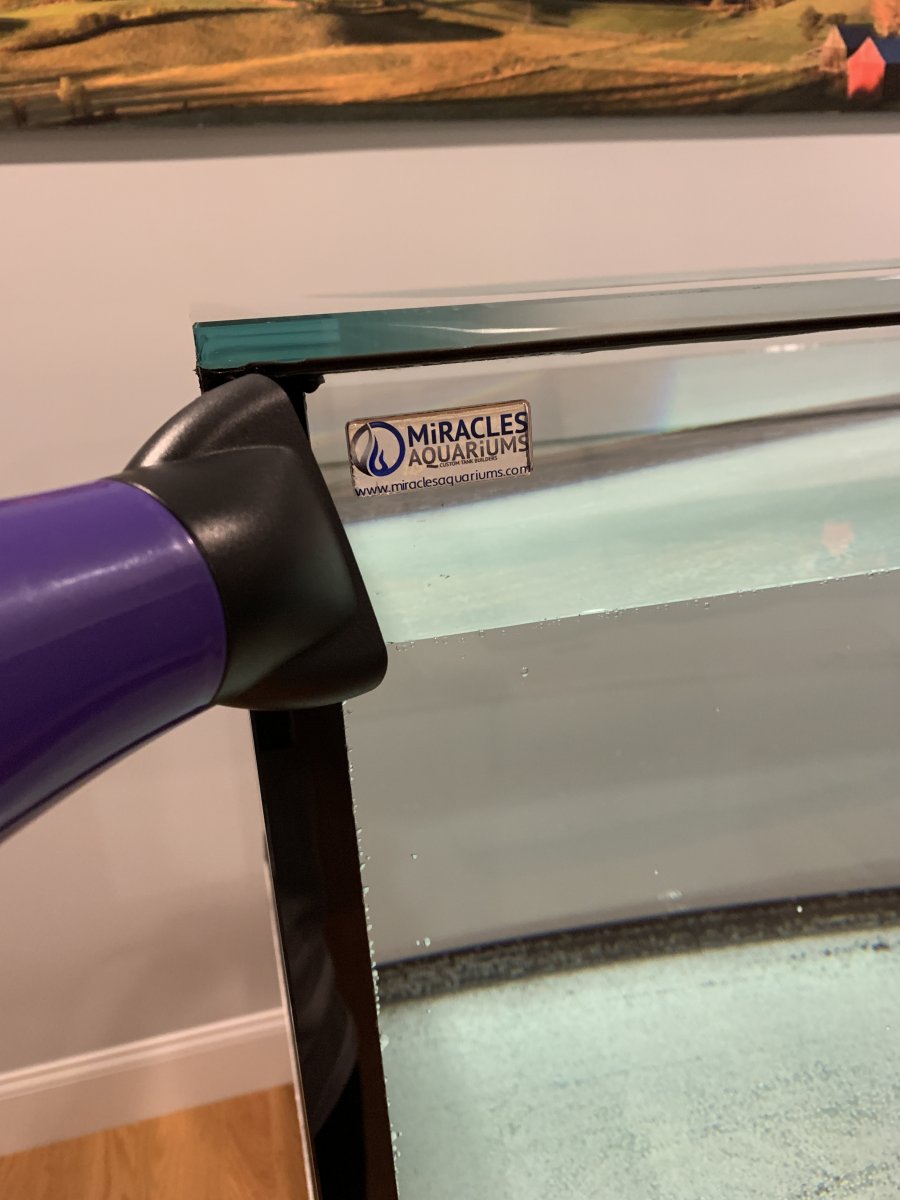 Started plumbing. Hoping to get it running after this weekend. 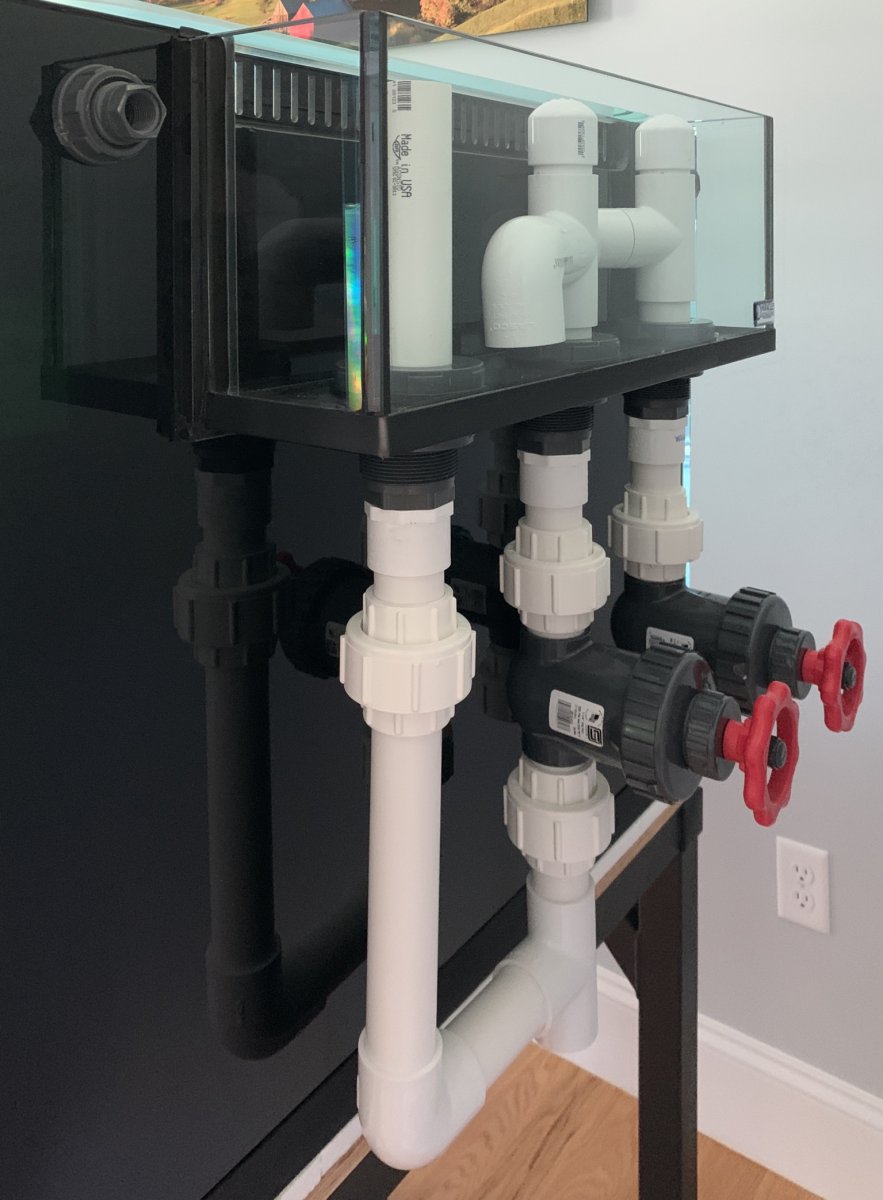 BRS Member
That is a great start Nick! It is going to be a epic build. Love the single piece euro brace with curved corner. Really nice!

Is the emergency overflow line joining back on the primary? Is that because the drain section has only two inlets?

Staff member
BRS Member
Officer
So pumped to watch this build grow, hopefully there will be some more pictures of the frag tank as well.

rock-n-reef said:
That is a great start Nick! It is going to be a epic build. Love the single piece euro brace with curved corner. Really nice!

Is the emergency overflow line joining back on the primary? Is that because the drain section has only two inlets?
Click to expand...

No. The emergency drain is just that. An emergency. The rest of the time it’s dry. I don’t want to put another valve and union on it and another hole in the wall/floor. So it’s tied into the primary/secondary pipe.
I’ll also have a shut off return trigger if the drain is somehow clogged. You’ll see this later in the build.

this is me said:
No. The emergency drain is just that. An emergency. The rest of the time it’s dry. I don’t want to put another valve and union on it and another hole in the wall/floor. So it’s tied into the primary/secondary pipe.
I’ll also have a shut off return trigger if the drain is somehow clogged. You’ll see this later in the build.
Click to expand...

I hope it works. Because I have no idea what I’m doing.

BRS Member
Looks awesome! Dream build. Question, I have seen the elbows on the plumbing inside of the overflow before. I currently have an eshopps eclipse overflow I am repurposing. The eclipse just drains from the bottom. Do the elbows help prevent the whirlpool effect and sound?

BRS Member
Yeah they elbow seen there is a relic from the old Durso standpipes and it’s just a cleaner, quieter setup

BRS Member
Thanks, quieter is the key word for me!

If you have room in the overflow for the elbows, it cuts down noise. And maybe avoid objects going down the pipe. I don’t know why there would be any object in your overflow but who knows)

BRS Member
Thank you, is there a benefit having it built with a T and a cap versus just using two elbows?

I don’t think there’s any benefit. It just how I did it on the last tank and knew what to get at the hardware store. Depending on the size of your overflow, you might want to reduce the number of components.
Give this a watch. It’s very well explained on the Bean Animal type overflow.
N

looks great and very professional.
are you going to run your sump out from the basement?

Yes. Sump in basement. I need to fix a couple things in my plumbing. Should be good this weekend. 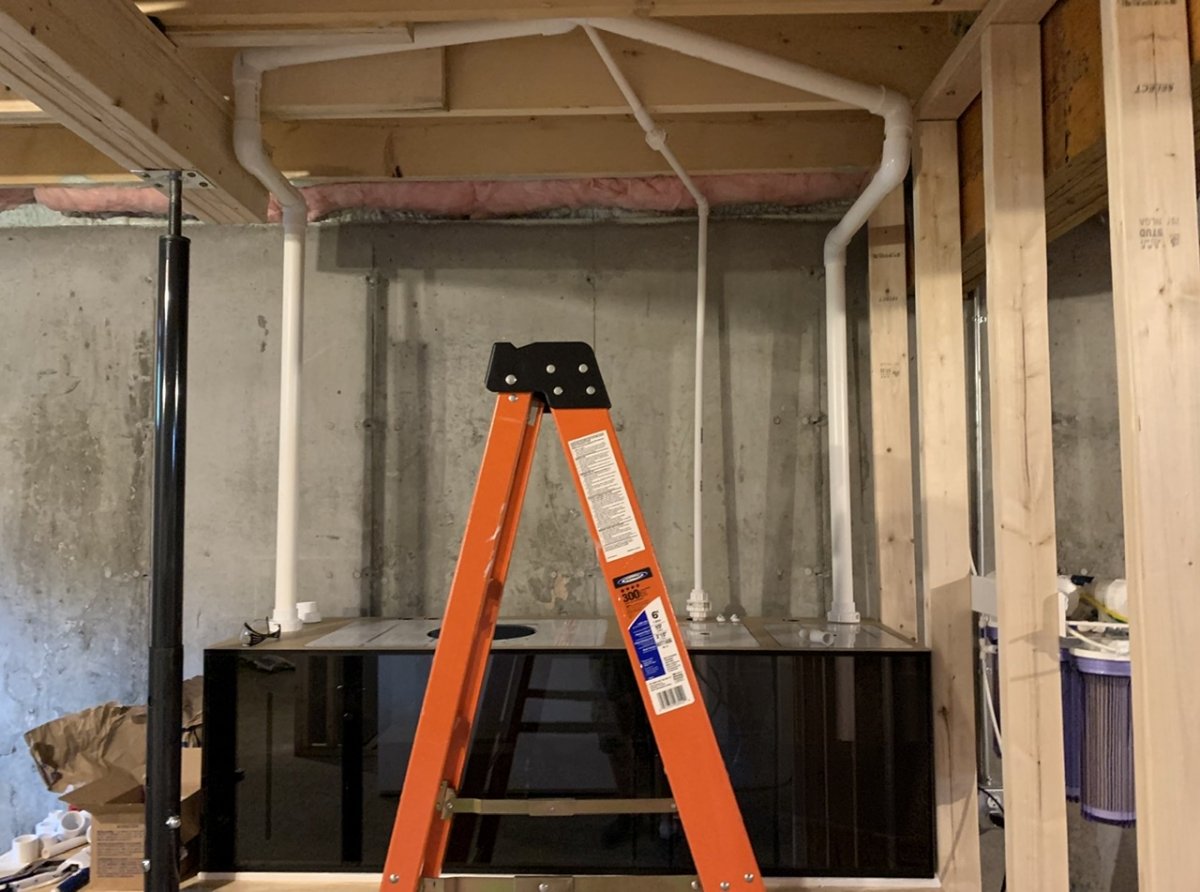 BRS Member
Did you consider raising the sump to reduce head height? Think it's worth it at all?

I originally made the sump stand to be 32”. I didn’t want to make it higher because I don’t want to strain on reaching into the sump or have to use a step stool to get the skimmer cup out. The sump is already 18” high.
Then I look at the waterbox frag tank and it’s just a little higher than the sump. I need to be able to drain into the sump. I cut down the stand to 28”. It’s actually better because the sump is now at my waist level. Easier to clean. I have about 11’ of head.
I’m using an L1 as a return. I had to redo the return plumbing because I was using sch80 bulkhead which reduces the piping down to 1/2”. I’m now working on getting 3/4” for return and see how the L1 will handle the head.

Plumbing is done and running the system with freshwater to clean up pipes and leak test. So far so good. will be using the water to wash the sand.
A couple things. The teeing off the emergency and the durso was a bad idea. Lol. It works. However, the open pipe teeing off the durso acts like a sound amplifier of the flowing water in the durso pipe. Very loud and a bad idea. Don’t do that.
The schedule 80 bulkhead is great. On the drain but not on the return. Depending on your hole size, the sch80 restrict the pipe size too much. On the drain, I was able to get away with 1 1/4”pipe with plenty of room to spare. But on the return, the sch80 restrict the pipe to 1/2”. This puts a lot of stress on the Vectra L1. It was whining and complaining. As much as I hate ABS bulkhead, they do work just fine and allows for 3/4” pipe. The L1 is now happy and only running at about 80%. I will let it run for a couple days before draining it. 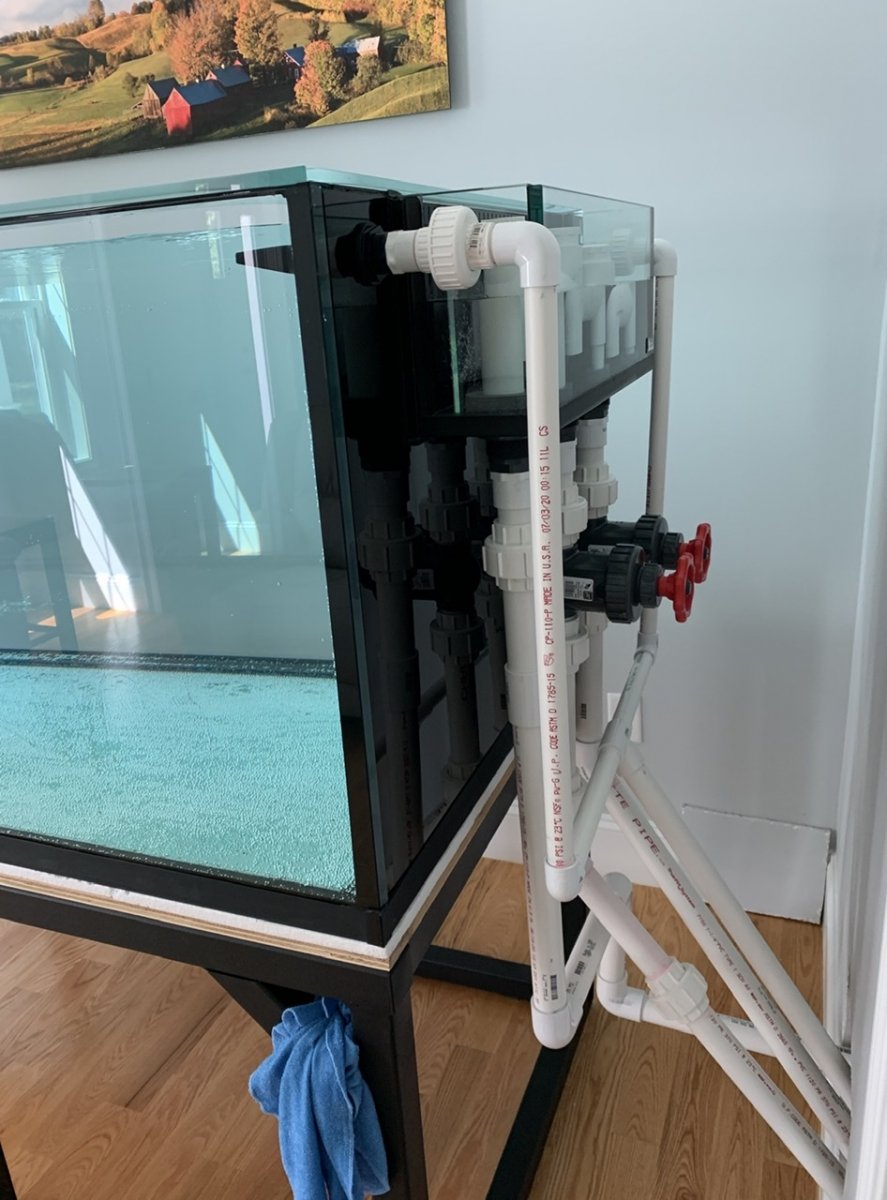 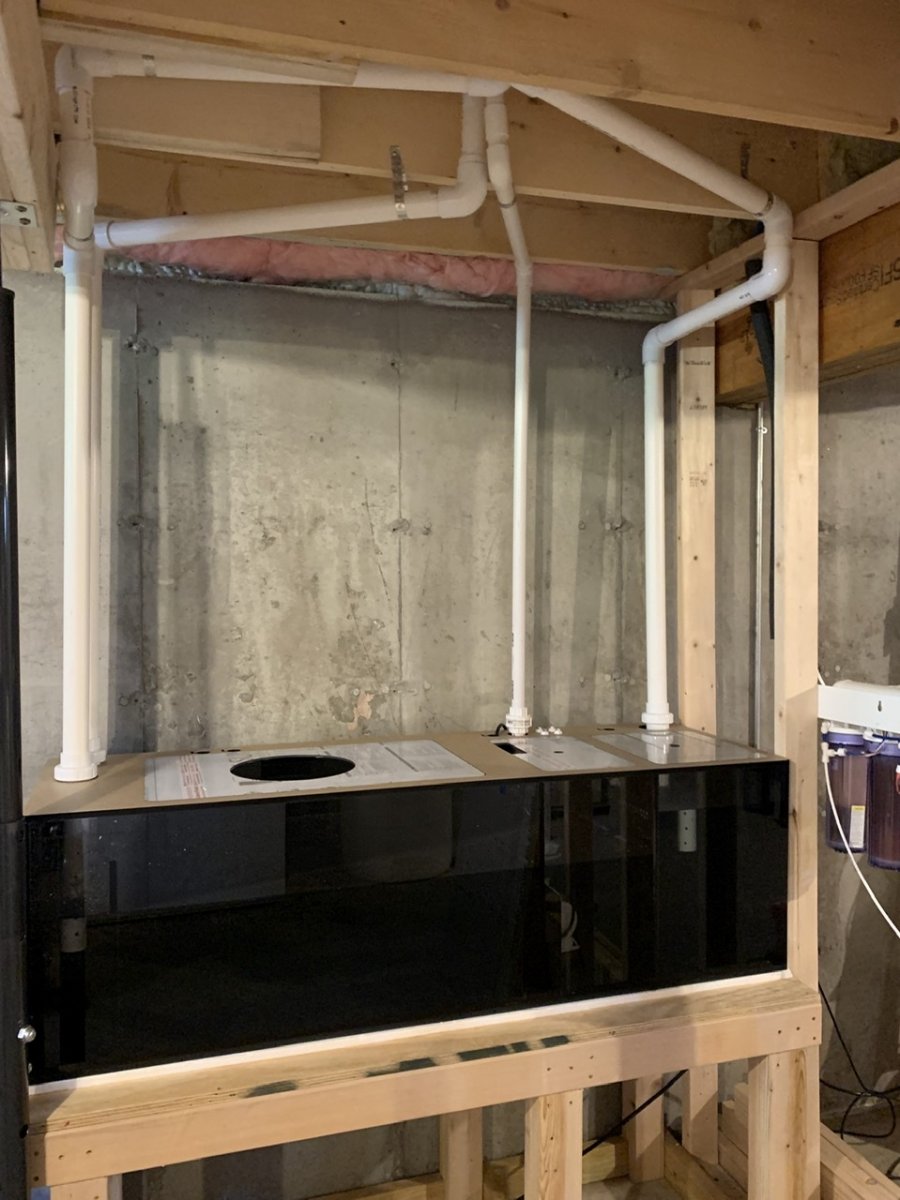