Not a total newbie as I was in the hobby for 10 years or so doing FO saltwater through college. Interned at the NEAQ in lobster husbandry. Settled down in RI and started a family. I always planned to get into reefing but it was sort of thrust upon us when we were gifted a 2.9 gal pico in rough shape.

Right now, we are beginning the cycle on a 30l Nuvo. Did 30 lbs of aragonite, 25 lbs shelf rock. Right now just running a mighty jet and a RS ReefWave 25 gyre for flow, may end up adding a second gyre. Skimmer is the Tunze 9004, and have the stock IM UV stertilizer (neither running during cycle). Planning on adding a fuge to one of the chambers. Haven't decided on lighting but between A360X and the AP9X.

First PSA as a sort of beginner - Dr. Tim's ammonia dosing for cycling is way off, as I have now seen all over the internet. Trying to dial in a drop amount to restart our cycle, will likely have to drain most of the tank to make it happen. It seems like about 1 drop per 2 liters (1/8 the bottle recommendation) is going to get me to the 2 PPM target. Pictures to follow...
L

Are you going to keep the Pico running, or transfer stuff over?
L

BRS Member
In the pico right now is a single duncan head, a peach octospawn, some GSP, and a frag of bam bam zoas. The frags were given to us by a friend that got into the hobby during the pandemic and quickly exited. We received a green torch also but it was in bad shape and died fairly quickly. My wife and I are talking about what to do with the 2.9 now because my father in law gave us the tank, and he will expect to see it (naturally) whenever he visits. We are thinking of moving everything except the bam bams and doing a small zoa garden. Also, there is some incentive to keep it going because the first 4 months were a rollercoaster but now we seem to have a system worked out to keep parameters stable, and we have had an explosion of pods in the tank with no predators (the azure damsel unfortunately hopped out one night I left the cover off). Could be useful for keeping pods in the 30 stocks and growing out some frags. I have a lot of shelf rock left over so I want to build a structure that fits in it compared to what we have now where everything is just piled on a single rock.
L

BRS Member
Cycle on the 30 gallon is in full swing, but my nitrite is still 1 ppm, ammonia about 0.2 ppm, nitrate about 12.

Current issue is that the 3 gallon began leaking (this tank is 4 months old), which is brutal. We have a 12 gallon bookshelf inbound but I am contemplating what to do. We may have to have the corals stationed at the LFS for a few weeks, although I am thinking with my current sand and 4 lbs of live rock, I may be able to have an accelerated cycle in the 12 gallon. Leaking is manageable right now, but not sure how long that will last. There is the chance the 30 gallon is cycled by the time the 12 gets here, and I can drop the corals in there for a few weeks while I cycle the 12 even though that's not really what I want to do.

get a 5 gallon bucket until the 12 gallon gets in, put all the corals in the bucket with a pump and heater.

if you want something bigger than 5 gal buck I have a couple 20 gallon food grade wide barrels that are perfect for holding tanks. its about 28 " Dia. and 20" tall (rough guess). if youd rather use that text (send pm) me. they come in handy for things like this...
L

BRS Member
On containers and buckets I should be good, have several 5 gallons and a few 8 gallons. More thinking about what sort of spikes I should see. If I am thinking about this correctly, my beneficial bacteria exists on the live rock and the sand. Obviously to fill the 12 gallon I'll at least need more sand, but I'm not sure how much that is going to spike ammonia and nitrite/trate. Lot of threads on R2R and Nano saying parameters will go crazy, a lot also saying things should be fine if you have established live rock.
L

BRS Member
Pico contents are in a container as the fluval completely let go. 12 gallon bookshelf Mr. Aqua arriving tomorrow, hoping to do something with mangroves. The cycle completed on the 30 gallon Monday, and Mocha Vinci pair went in today. Also got a Tunze 3155 ATO installed last night. Next job is organizing the cabinets. 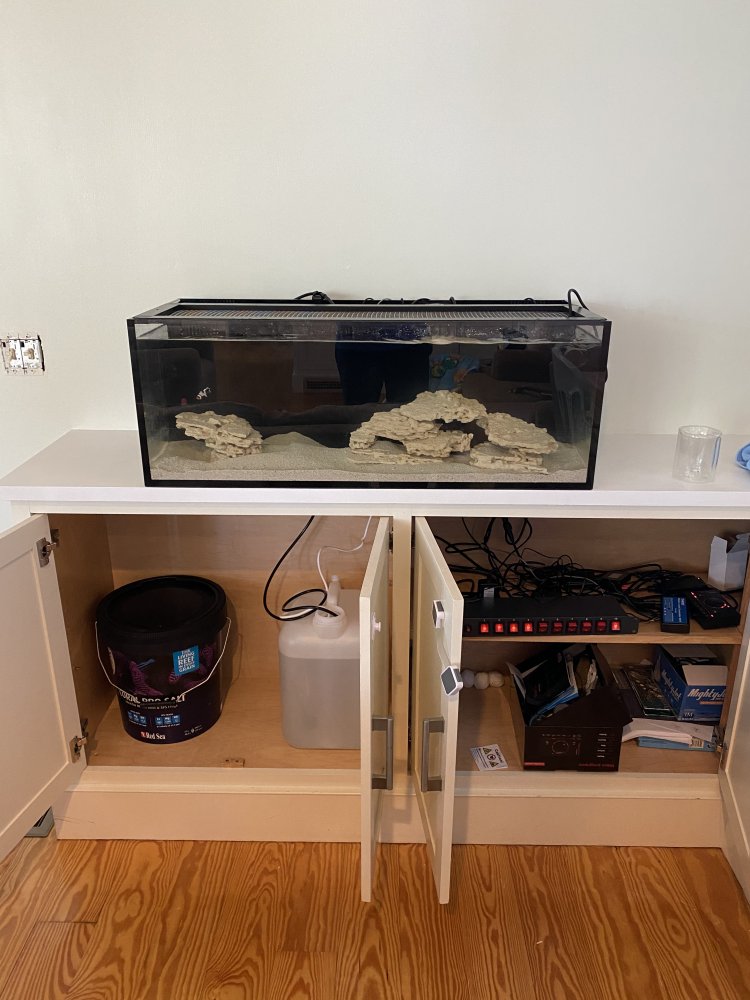 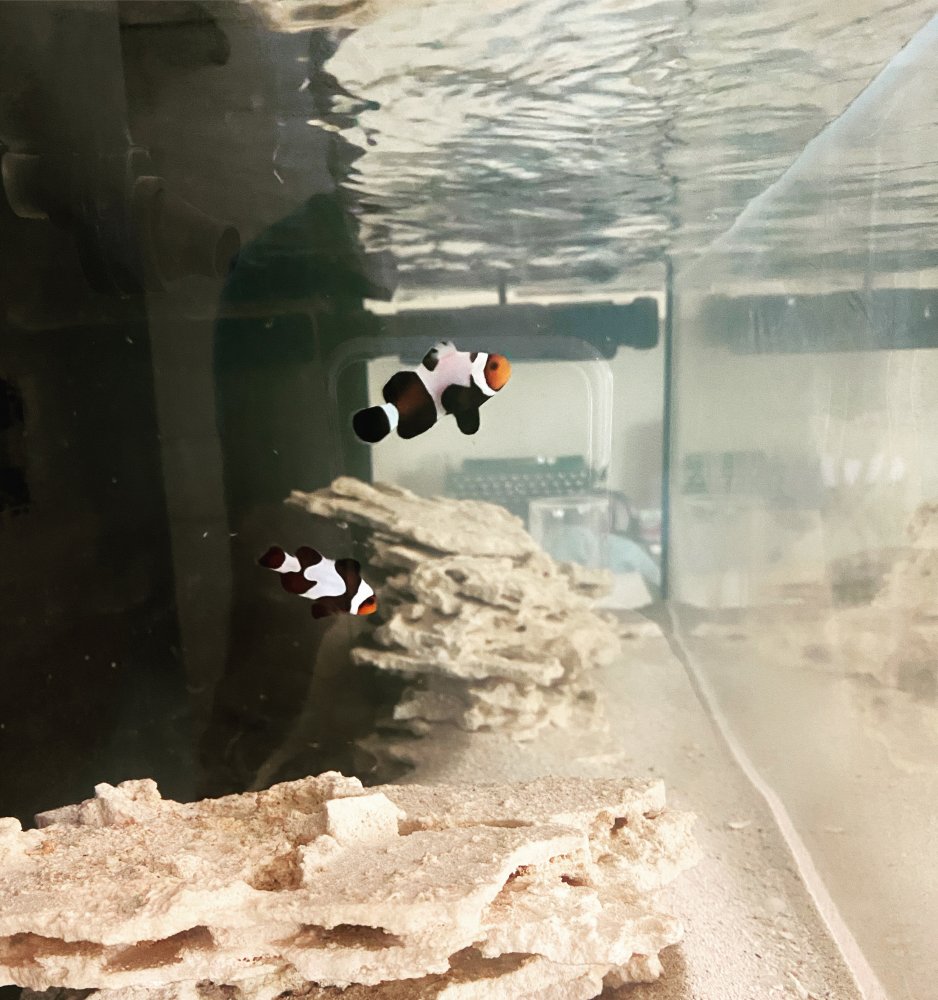 BRS Member
12 gallon up. Have another Kessil A80 on the way. Thinking that is all I will need for zoas. 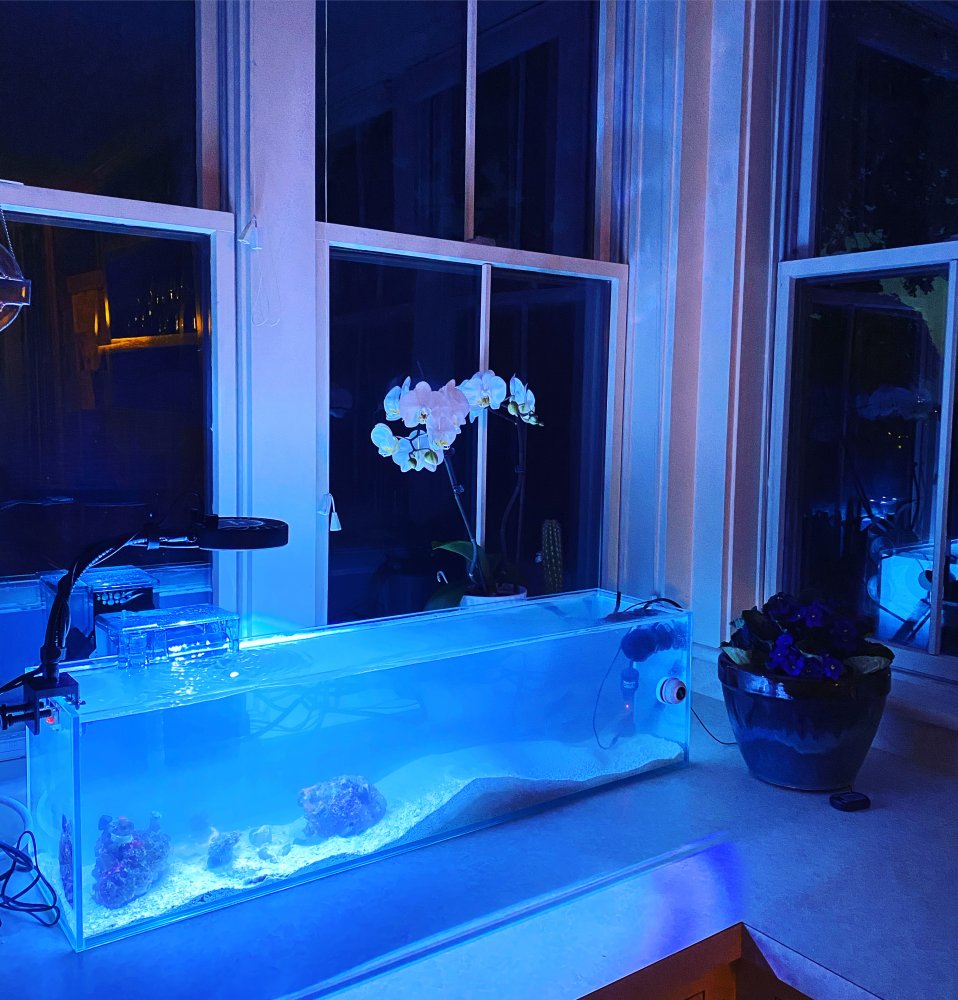 BRS Member
Things got weird with the 12 gallon tank today as I came home and the gold octo was ejecting all sorts of waste/zoo and everything was closed. My guess is a cycle started due to the 75% ish new surface area in the tank, and parameters went crazy. I am going to try and test everything tonight and even though I wanted to wait until October to put coral in the 30 gallon, that tank has been up a month now, so figuring it was better than whatever was happening in the 12 gallon, I moved everything over after drip acclimating. Octo seems to be recovering, everything else closed up. Right now I only have two Kessil A80s over the tank but that should get me to when the AP9X arrives. Pic is 4 hours later. 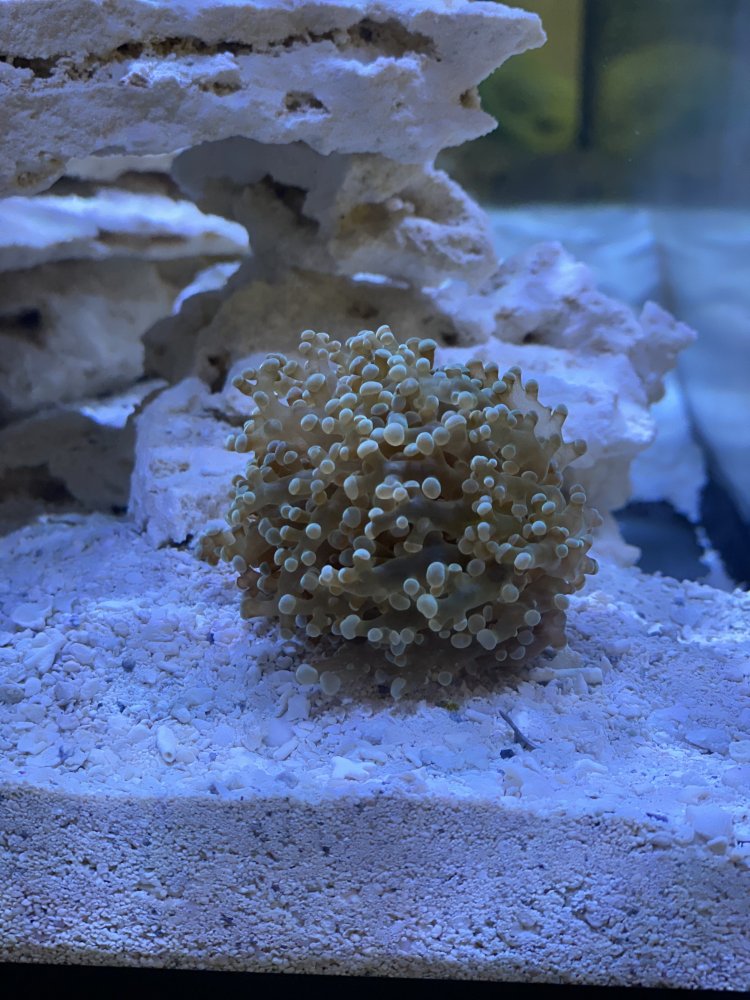 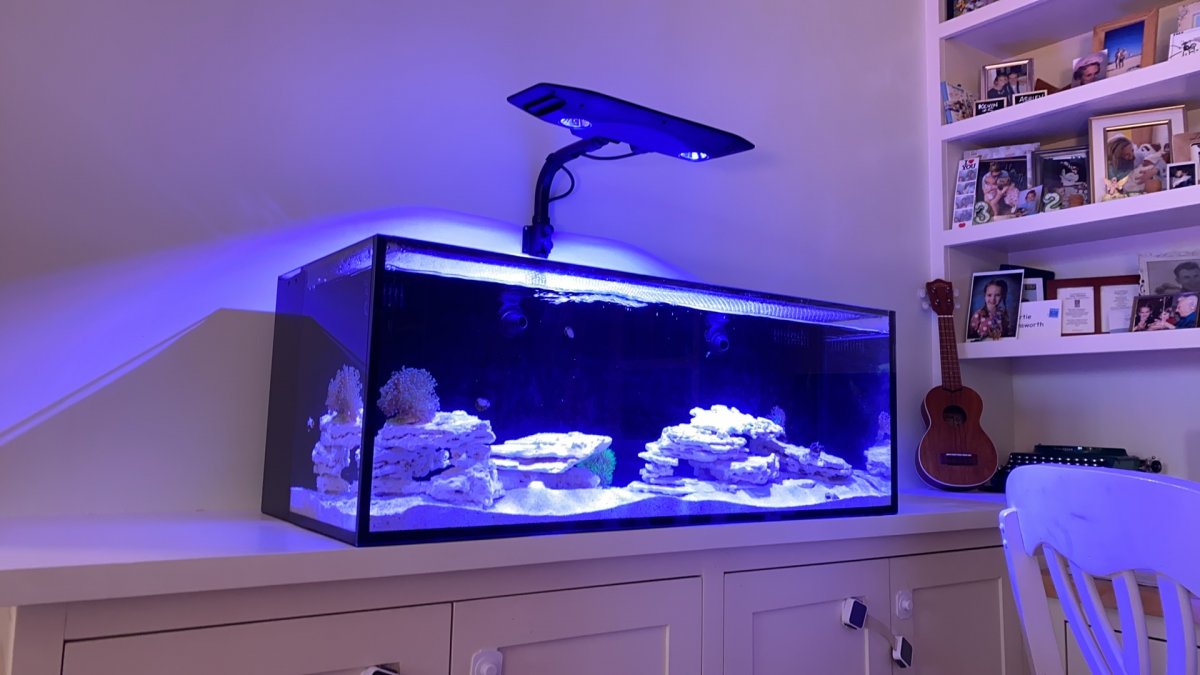 Was able to get the AP9X setup after a small headache where the arm didn’t fit inside the gap to the wall, and on the inside baffle it hung way over the front of the tank. Was able to rig it directly to the wall - luckily I was smart enough to center the tank along a stud.

After watching the BRS investigates, I am only ramping it up to 20% intensity at the highest point. Still playing with spectrum. Corals seem happy although I purposely left the octo unglued in case I need to move it to the sand bed long term. Now I just have to wait for the inevitable algae explosion.
L

BRS Member
The male clown, probably an inch at most, was sucked into my RW25 gyre and sustained major damage. Saturday had exposed tissue on his side and a big gash, was laying against the back glass. I needed a miracle because the kids are still scarred from the damsel that jumped out of our 3 gallon. I was going to hospitalize and treat him in the 3 gallon, but the female was distraught and hovering around him, and I had a weird feeling if I just left him he'd be better off if he had any chance at all. Miraculously five days later this guy is back out swimming in the water column and took food for the first time this morning. Sometimes the best thing to do is just leave them alone, which is something I didn't learn the first go round in this hobby.

Algae is starting to bloom as expected. I have some snails coming in.. Will try and get some pictures with our DSLR once tank is cleaned up.

Separately, if you own a Nuvo and haven't checked out inTank, I don't know what to say. I have added the floss overflow attachment which is 100 times better than the IM sock, and have also added the overflow baffles that raise the water level. Next up doing a refugium in the center return chamber to help with nutrients.
L

BRS Member
Added two bicolor angels yesterday. Hard to get them both in the same shot but so far no coral nipping, no angel on angel aggression, but watching closely. 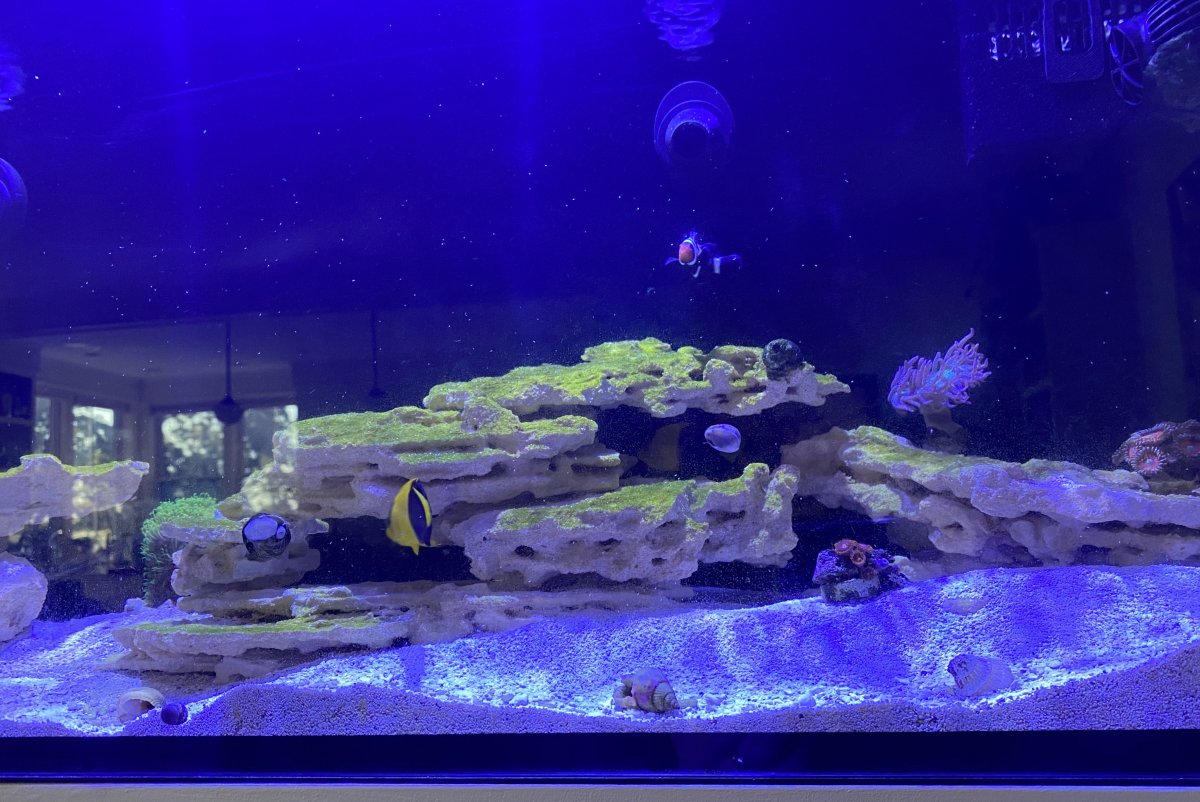 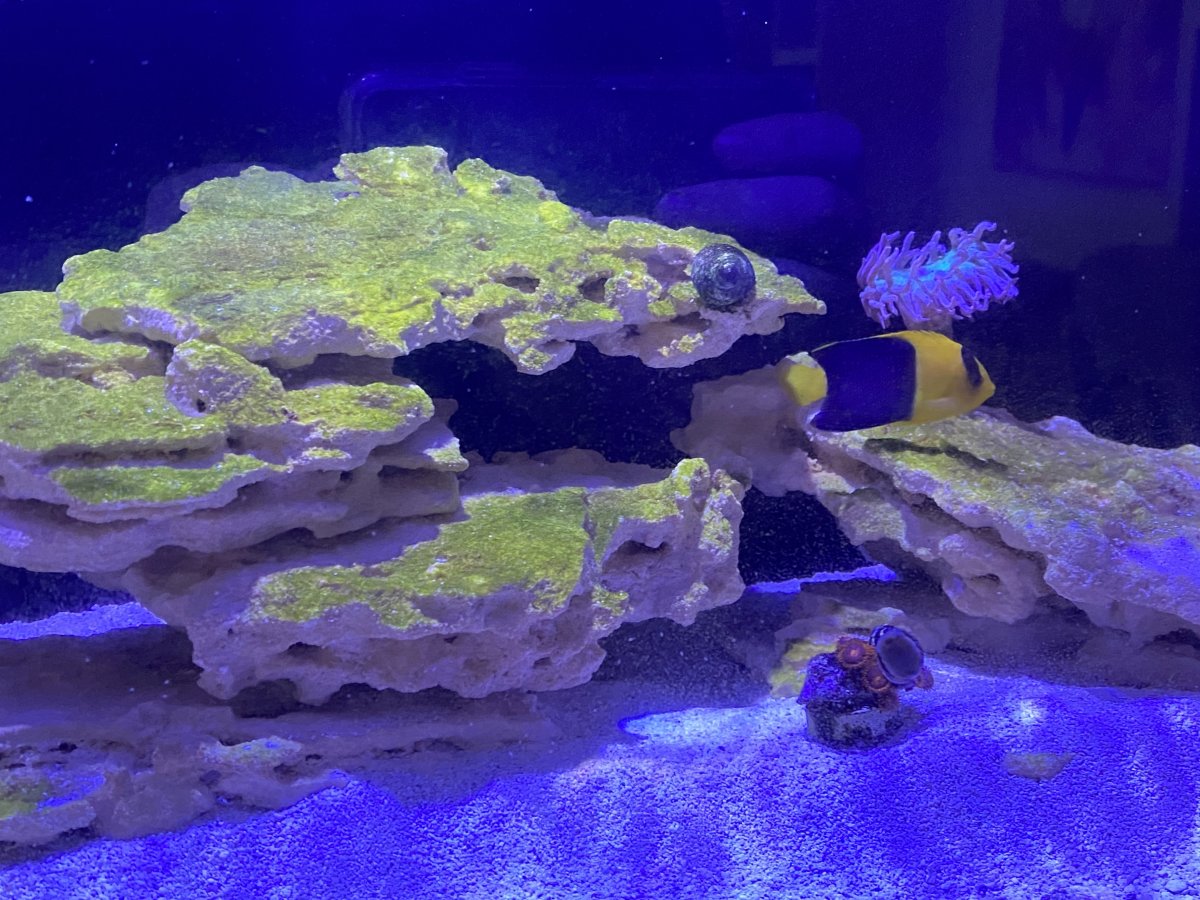 BRS Member
These two are quite happy together. Unfortunately the zoas had to go as they were both preying on them. One actually tore some new rainbow explosion off the rock. Was able to find them a new home. So far no picking on other corals. I have read they like Duncans, but it’s hard to tell because my Duncan is currently growing 4 new heads and is closed up, which I understand is common during growth. I was concerned the female clownfish would attack these two but so far no aggression except the occasional nip when foods in the water. 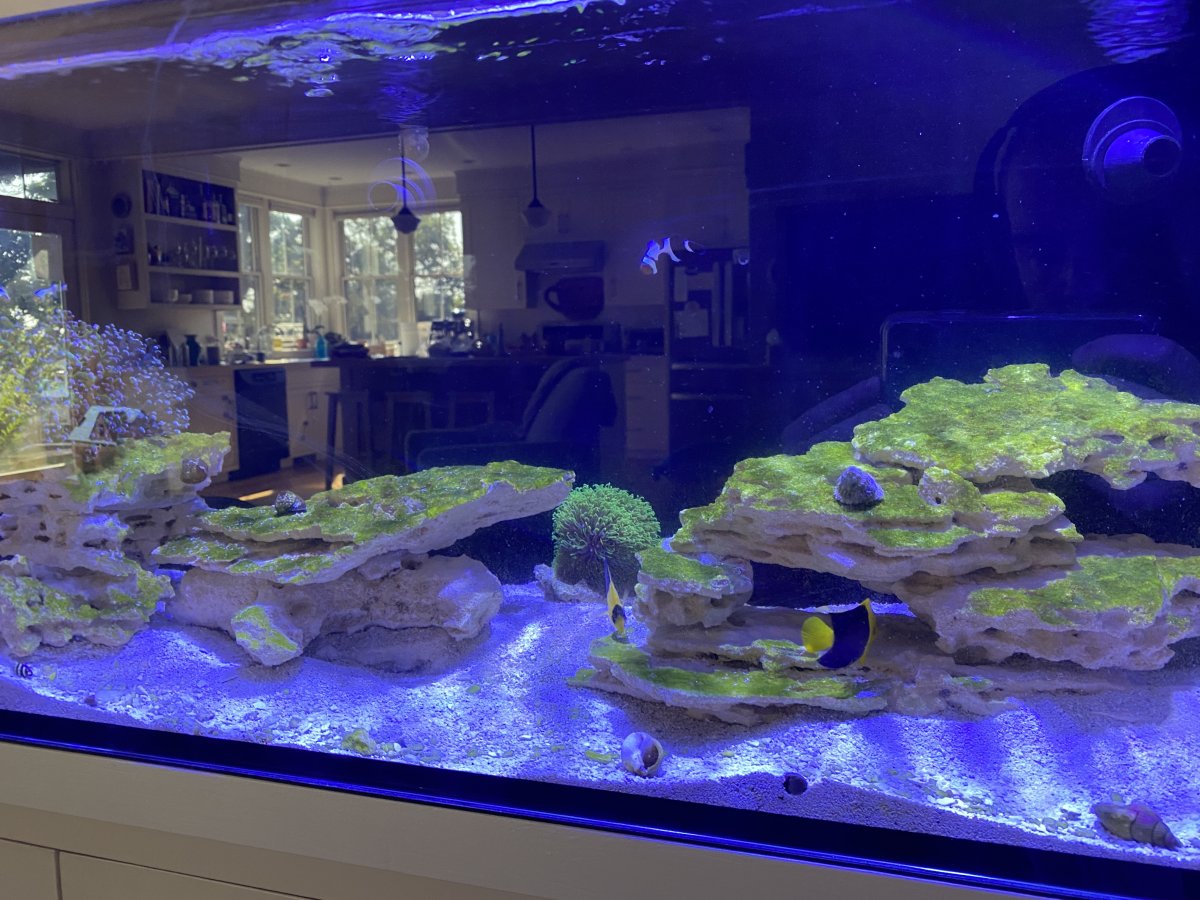 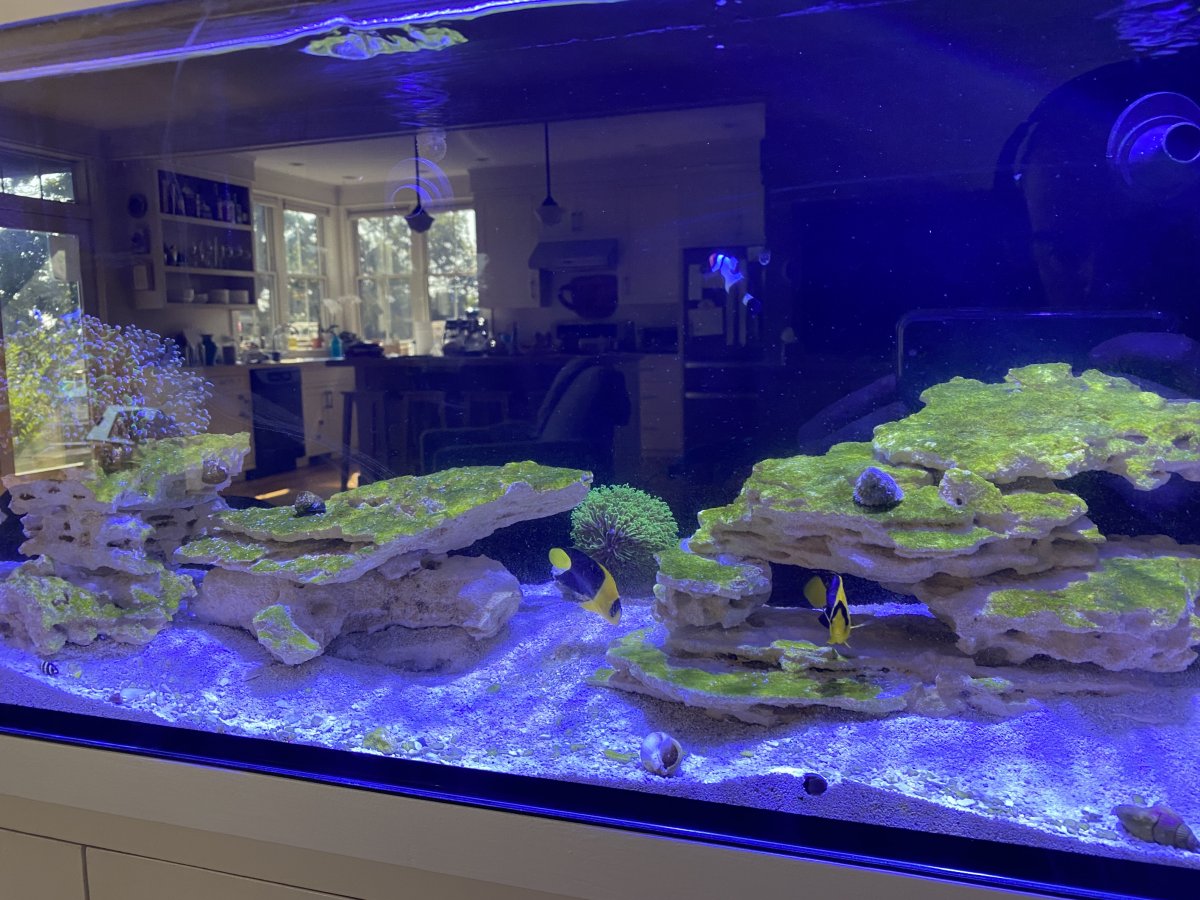 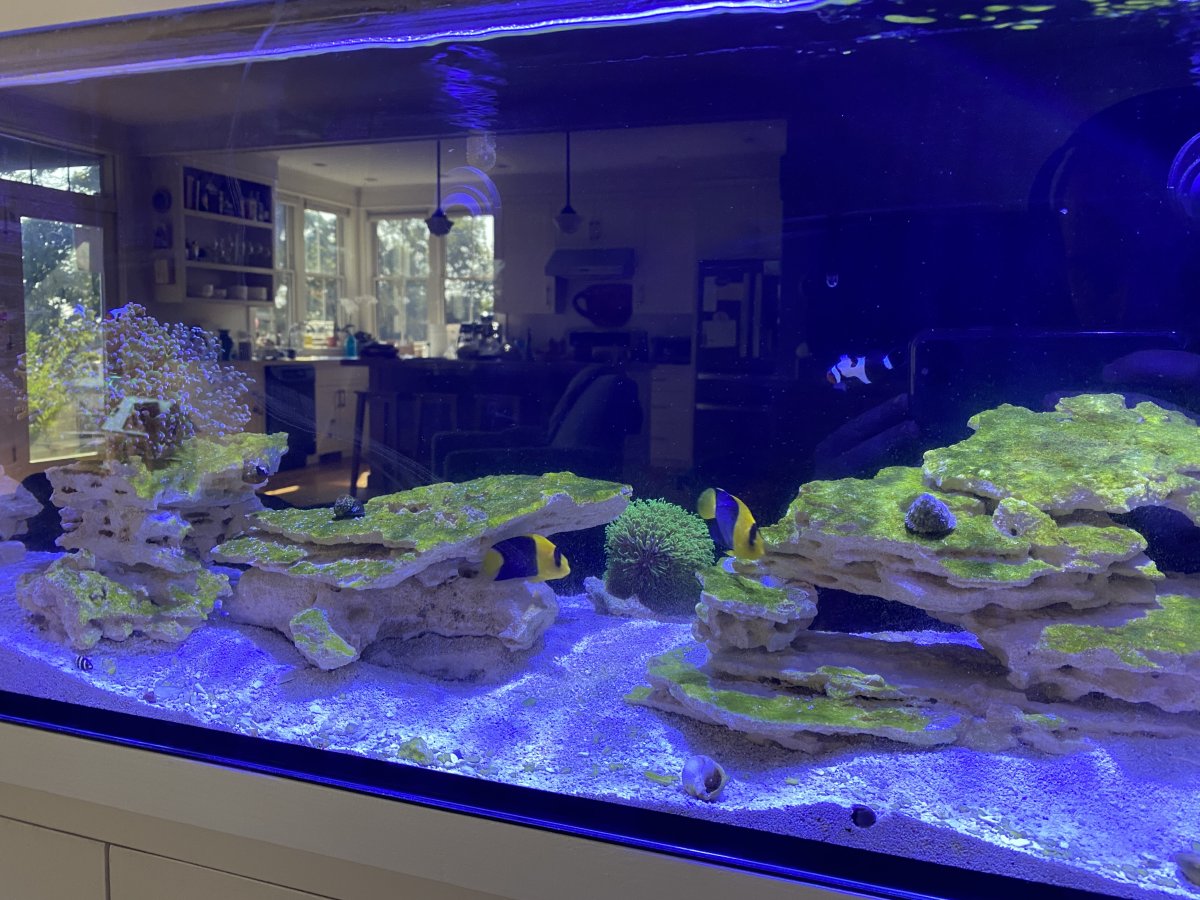 BRS Member
Male clown is back to 100%. Still not entirely sure what happened but still guessing it was sucked into the gyre. There is no nemguard for the reefwave 25 yet as far as I know, so I am going without it for now.

Next time I clean the tank I will try and get a full tank shot with my DSLR. The scape I think is contributing to the angels being happy - there are enough caves that they can do their own thing.
L

BRS Member
I will not say the angels have paired but they are beyond frenemies now and swim around together/sleep in the same cave. Pretty cool to watch. I did my best to get a picture but they’re so fast. I had to remove my zoas and the Duncan is next. They don’t touch GSP or the octospawns, but they’re shredding everything else. I added a small leather they are leaving be for now.

i am finishing my basement and likely doing a big F/O to keep some non reef safe species so long term they probably go in there.

added a fuge to chamber 4 with chaeto. Getting good growth so far just using kalkwasser and good salt. 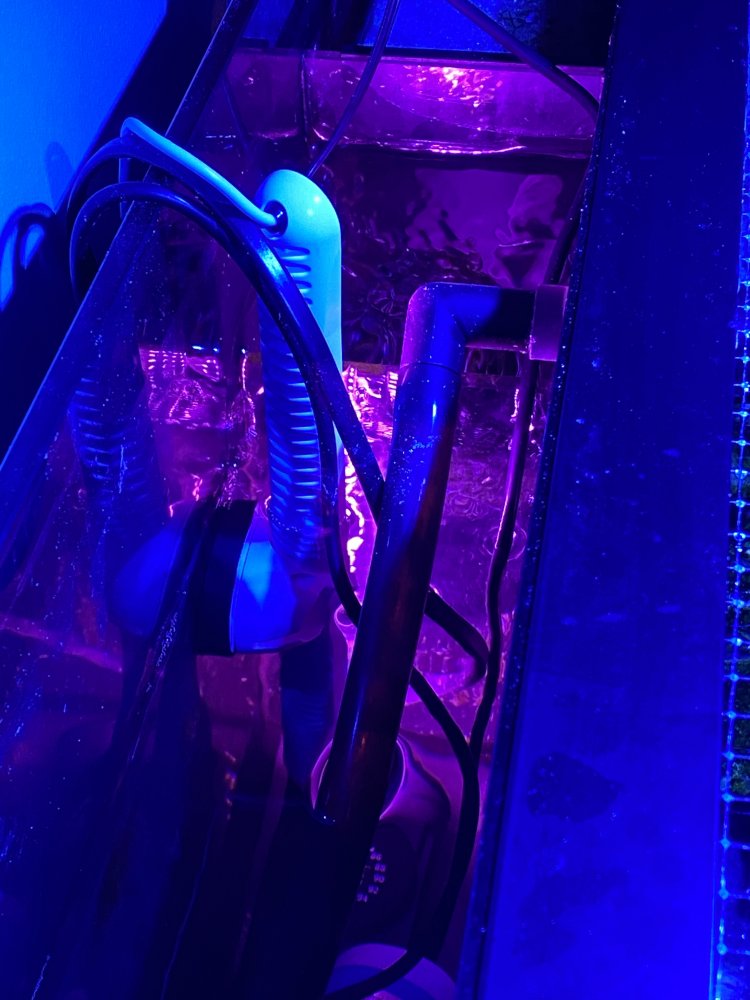 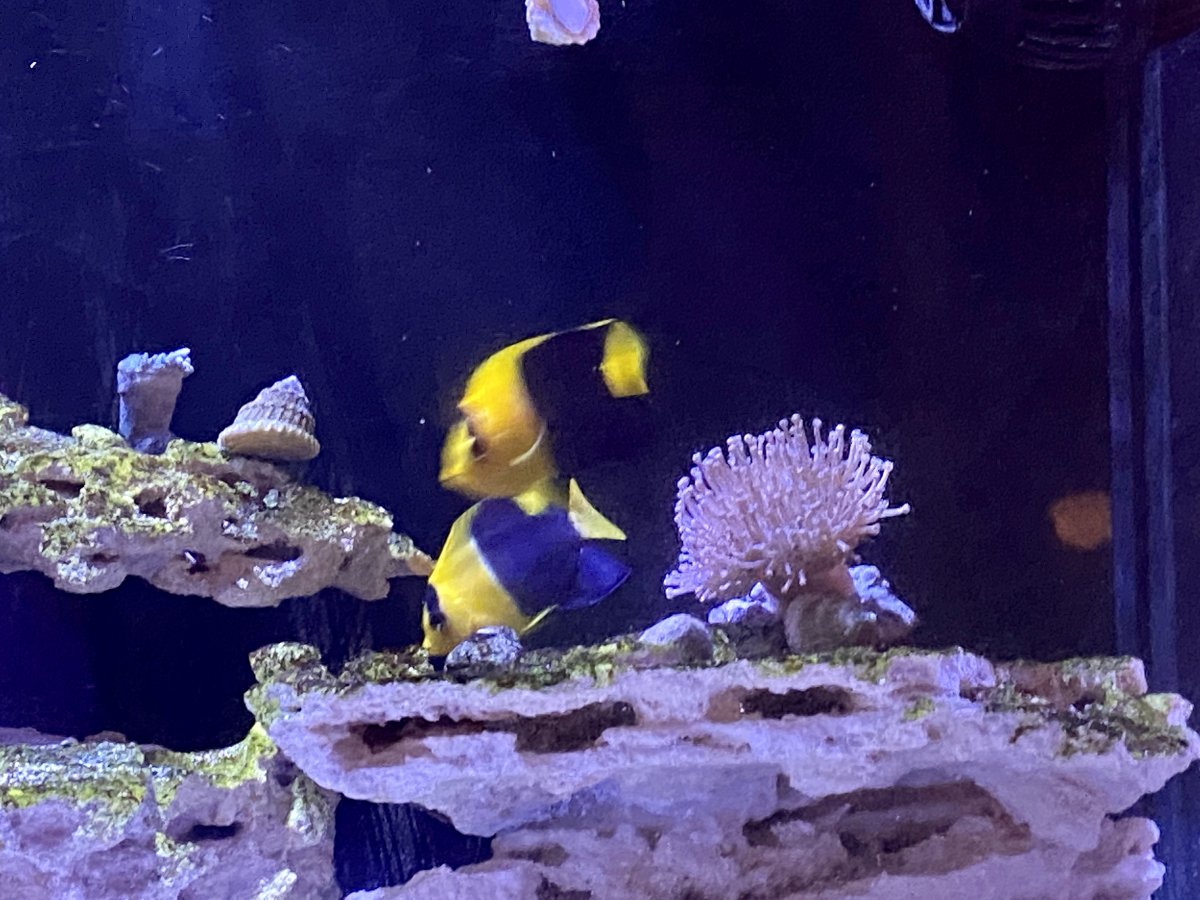 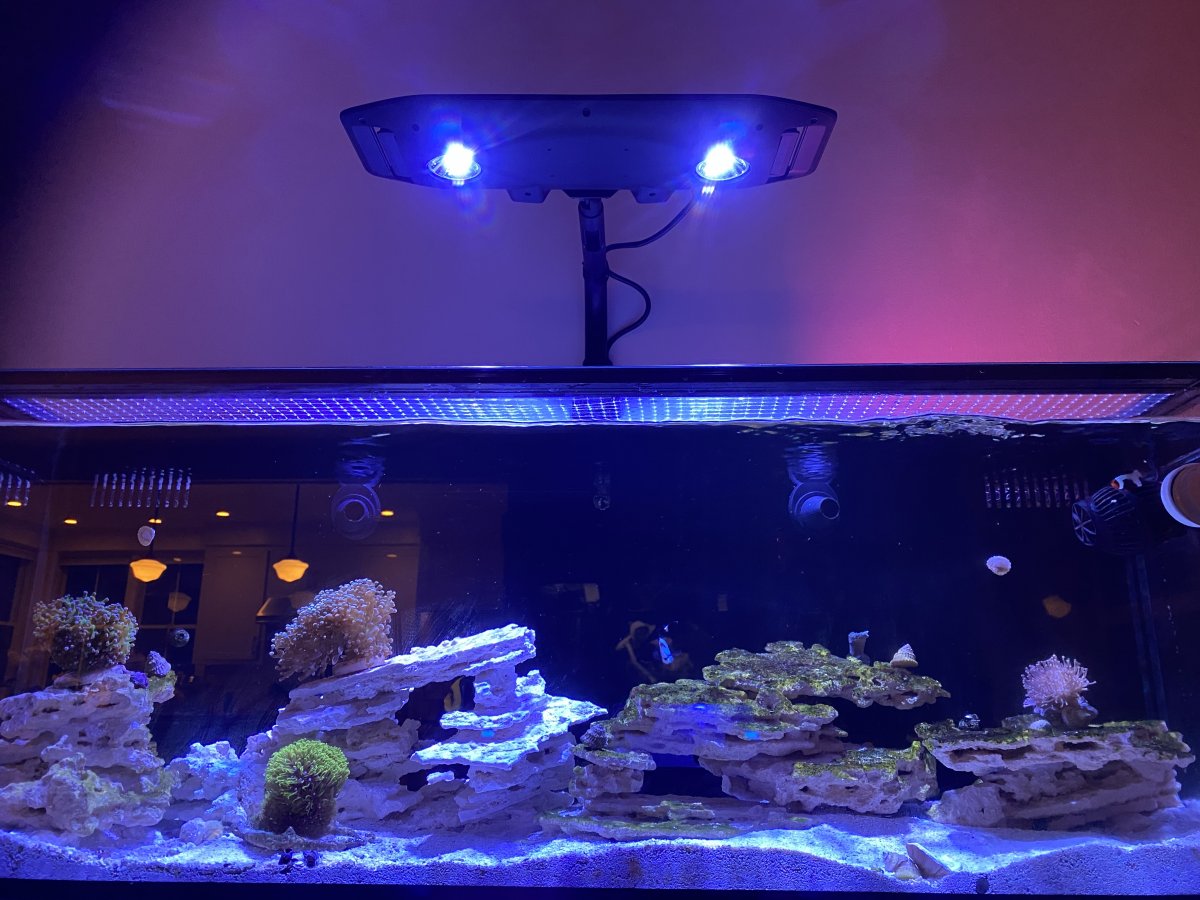 BRS Member
The angels took a turn and started eating everything. One of the reasons I tried it before too much was in the tank. Ended up trading with @PThanh1968, and with some frags also from @andlim my zoa garden centerpiece is seeded. 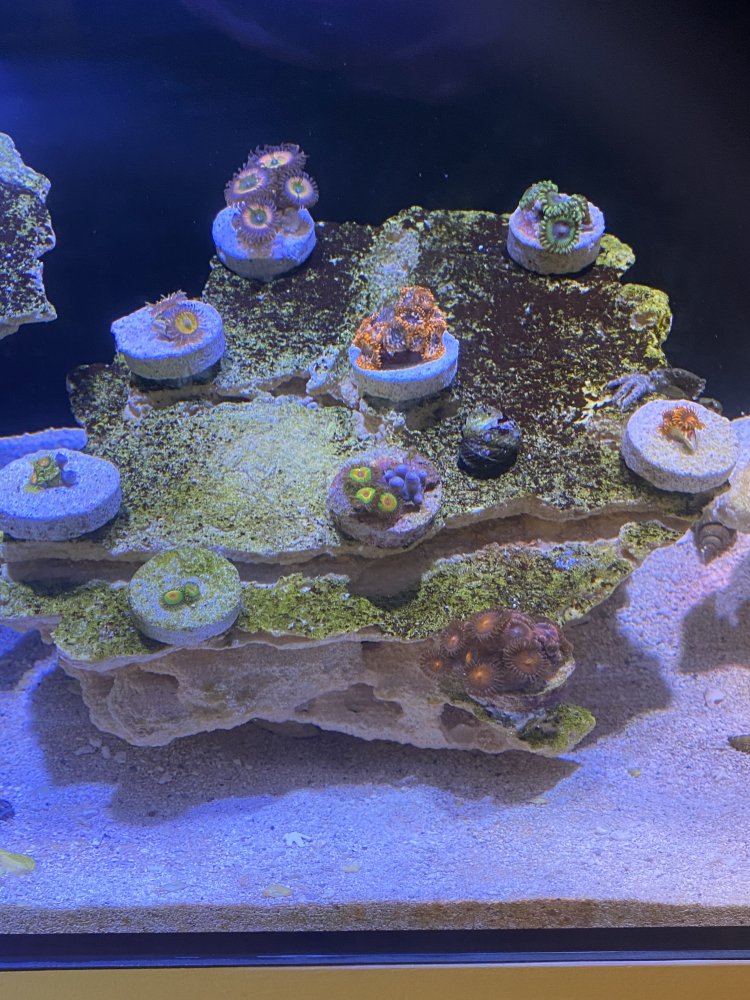 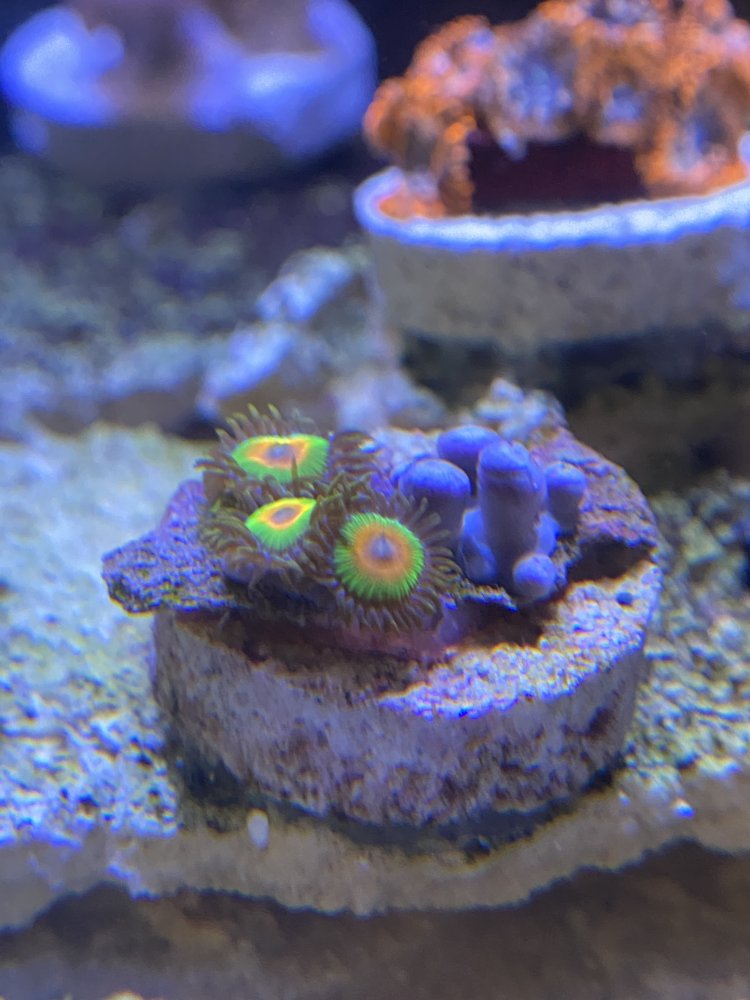 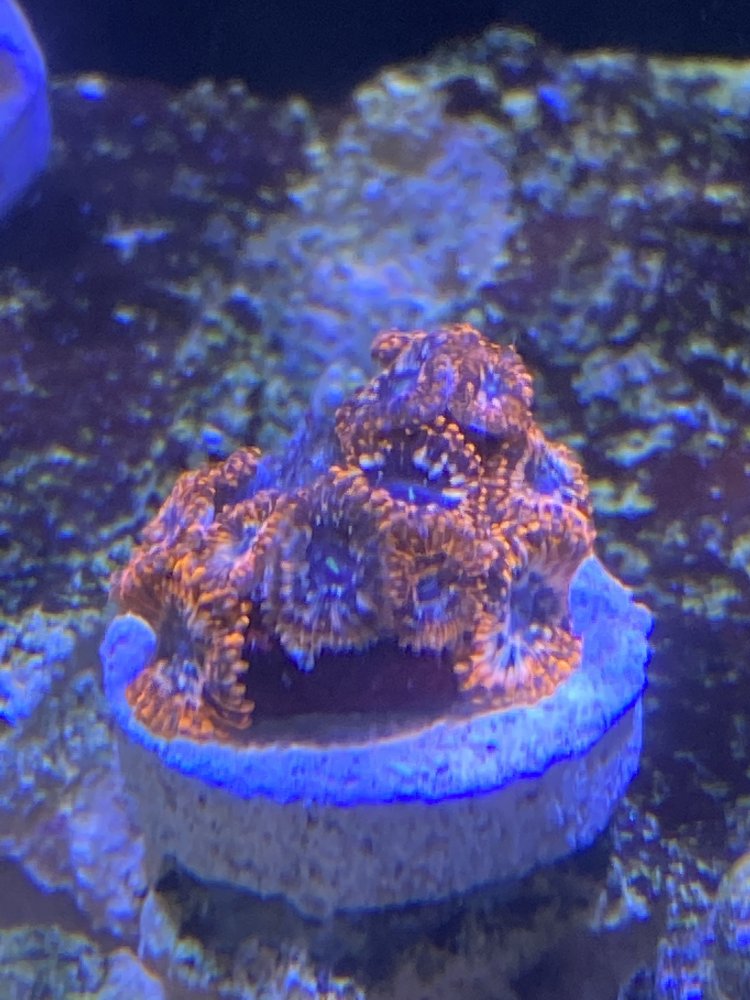