I’ve had water in my 40b since the middle of March, so 8 months. I started the tank with dry sand and dry rock. I did add some live rock about 2 months in. Cycled it using store bought bacteria and fish food.

Currently in the tank are a pair of clowns, a starry blenny, a skunk cleaner shrimp, a couple of hermits, and a handful of snails. I have had trouble keeping inverts alive. To date, I have lost a long spine urchin, a emerald crab, and countless snails. (Not all the original snails have died)

The tank is a 40b setup as a peninsula. I have 2 Jaebo RW4 powerheads running full power on a 1 second alternating pattern. I have 2 mag5 return pumps, one of which is T’d off to the refugium to control water level in the display. I am using a Reef Octopus Classic 110SSS skimmer. Lighting on the display is a Chinese black box with the lenses removed, running full blast on the blue channel and like 30% on the white. This is on for 12 hours a day.

I can’t control the algae. It’s brown, stringy, and sometimes has bubbles. I’m assuming it’s a combination of bubble and hair algae. If I siphon it out, it looks good for about a day or two and then comes back twice as bad as it ever has. It’s been a vicious battle, and I’m losing. This has been going on for a couple months now, getting worse with every attempt. There is zero algae growth in the refugium, but the chaeto does phenomenal.

I am looking for pointers. Ways to save this, or ways to go about starting over.

I am open to moving the fish back into the hospital tank, but not sure the inverts would survive it as it did once have copper in it.

BRS Member
Provide some pictures of “Algae”. I got an idea what is going on but need confirmation.

Here are a few pics. One pic shows it sticking to the glass. 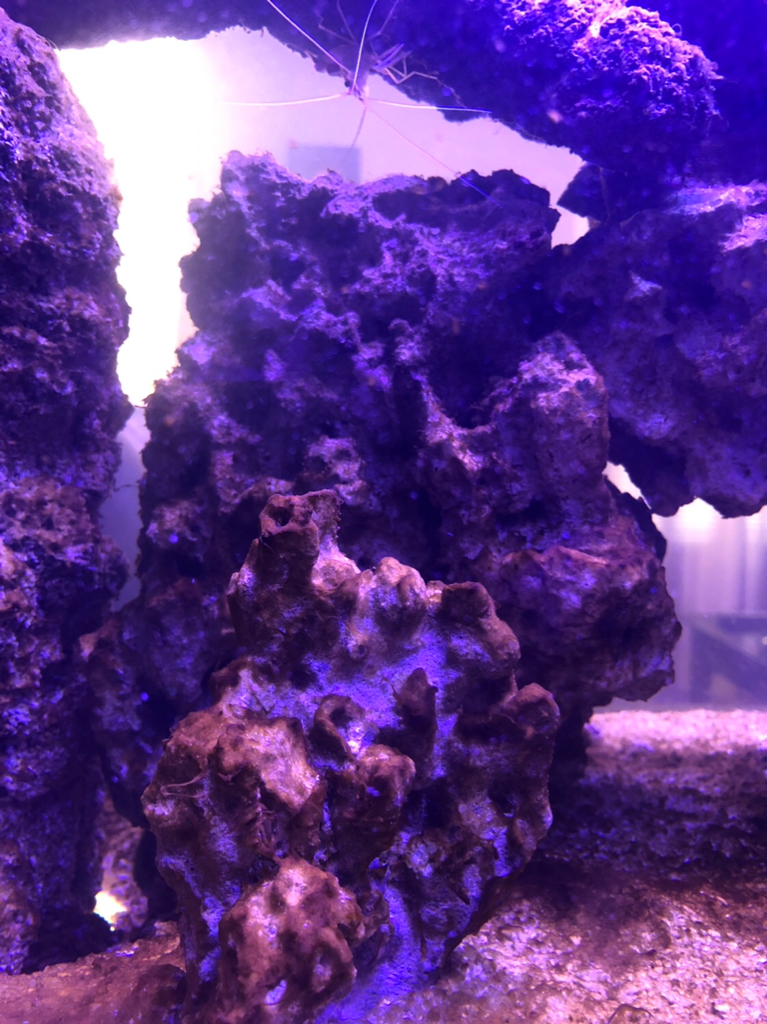 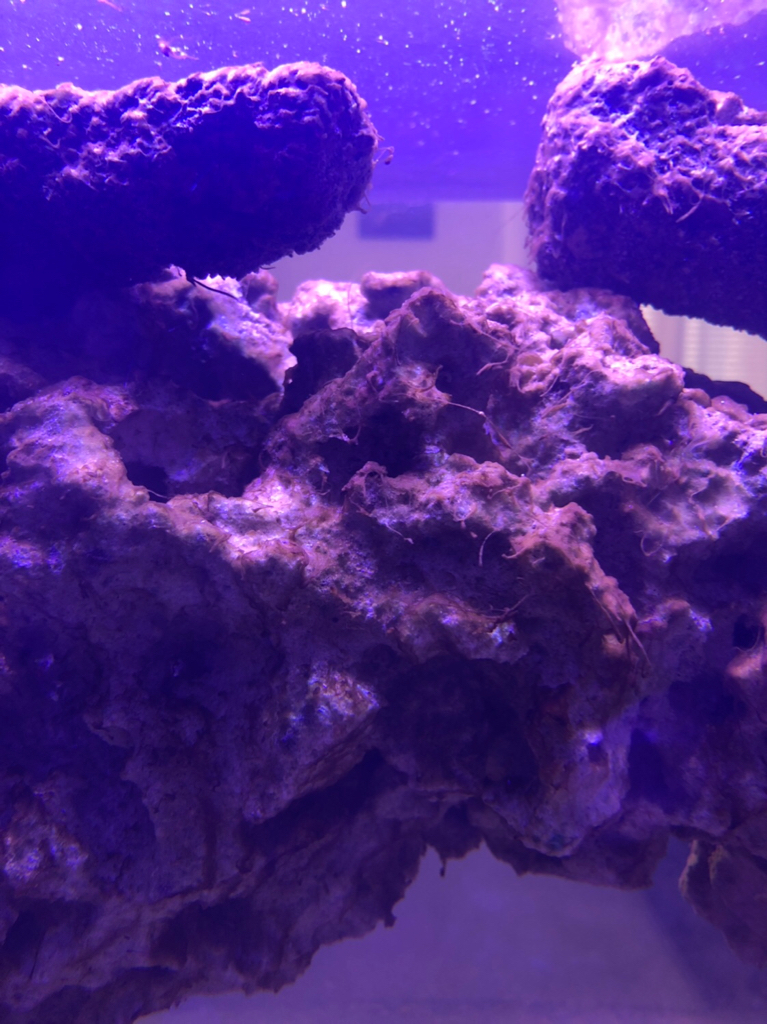 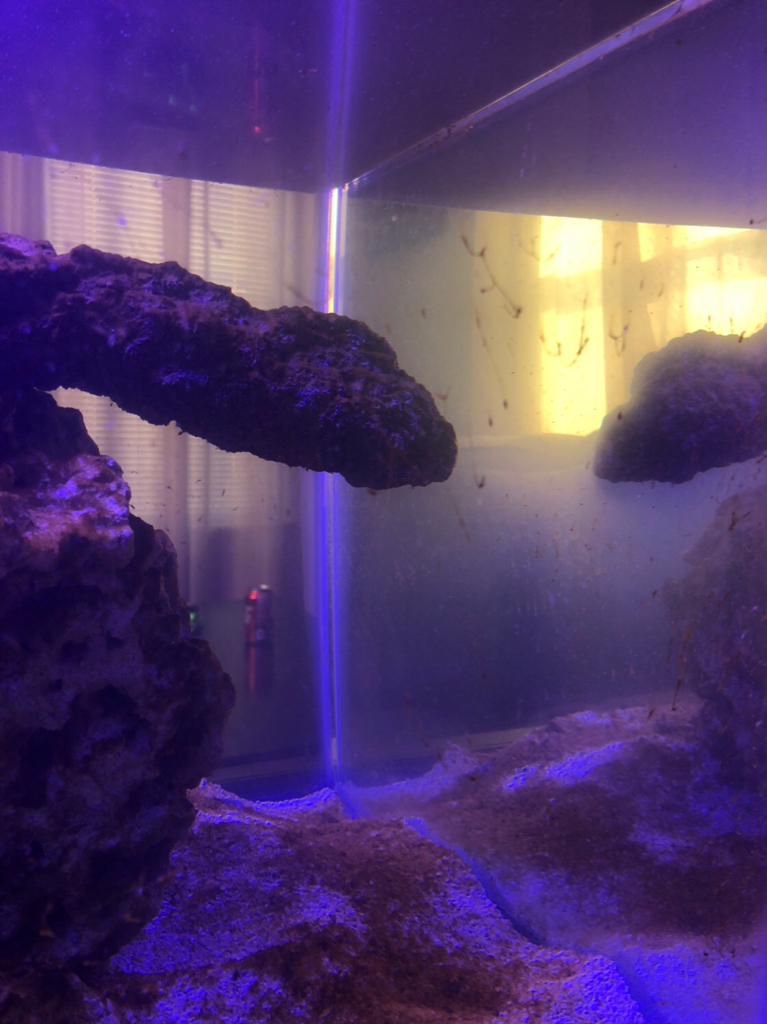 Sent from my iPhone using Tapatalk

Sent from my iPhone using Tapatalk

Can you let us know what all your water parameters are. I assume you are using RO/DI water for top off and water changes. Seems as though it may be lacking flow for there to be that much algae.

MarvinsReef said:
Can you let us know what all your water parameters are. I assume you are using RO/DI water for top off and water changes. Seems as though it may be lacking flow for there to be that much algae.
Click to expand...

I am only testing ph, ammonia, nitrate, and nitrite. They all test fine. The salinity is a little strong at 1.026 but it’s due for a water change and top off anyhow.

Yes. I am using store bought RODI water for everything. I mix in my own salt, which is RPM.

I understand lack of flow can cause this... but where the flow is the highest in the tank, it’s just as bad.

To me it sounds like the tank is getting a whole lot of a light. I agree with the black out idea. Also, test your nitrates and phosphates. See where they are at

So keep it topped off, fed, and blacked out?

Your filtration may actually be too aggressive and some people end up dosing nitrate and phosphate. This can be an issue with dry rock in a new tank with a lack of biodiversity
T

I had close to the same problem but i solved it with less light, sand sifting star, cleaner shrimp, and adding a refugium. Too much light can affect algae growth quite a bit. If that's done and still have a problem, its probably the water you're putting in your tank is adding too much nutrients.

UV Srerilizer as well as blackout should help. Run the flow slow through the UV.
R

BRS Member
Awhile back when I dealt with them the following finally allowed me to succeed.
1. UV sterilizer. Flow very slow ran directly in the display tank.
2. Siphon Dinos out, pour water back into sump through a filter sock. (This needs to be done every other day. It’s brutal but works)
3. Slowly remove entire sand bed.
4. Add new fresh bacteria (new live rock, dr Tim’s, etc)

Side not I also increased feeding during all this and contrary to most advice I still did water changes albeit not as often.

You will beat them if you do this. You can add sand back in after awhile of being Dino free. You will be shocked how many Dinos are in your sand bed. Blackouts don’t do anything long term. You will get false hope from them just to have them come back a week later. Not to mention your corals get very upset 3+ days no light.

I had the same problem around the same time frame with my tank. Did a water change and kept the light out for 3-4 days. All the algae died
off and hasn't been a problem since.

BRS Member
From the pictures it looks like your tank might be getting some light from your window? That could be an issue. I don't think you have dinos, it looks more like a mix of cyano,diatoms, and or the start of some type of hair algae. I would start by making sure the light isn't reaching the tank from that window then I would take a baster and blow off all your rock work and siphon all the gunk out and do water changes.

CoralJunkie said:
From the pictures it looks like your tank might be getting some light from your window? That could be an issue. I don't think you have dinos, it looks more like a mix of cyano,diatoms, and or the start of some type of hair algae. I would start by making sure the light isn't reaching the tank from that window then I would take a baster and blow off all your rock work and siphon all the gunk out and do water changes.
Click to expand...

Yes. This window does broadcast a decent amount of light into the tank. I would definitely put this down as an option, but the opposing side of the tank gets just as bad, or worse.

The tank went lights out/covered for 7 days. I did a 5 gal water change and tried to siphon out a majority of the problem. Mechanical removal has proven to be a pain in the butt. After 24 hours, 50% of the nuisance growth has returned.

I have toyed with the idea of adding MORE live rock from a reliable source, to add to the biodiversity in hopes to filter out the problem. The water is extremely clear, but I have also thought about adding a 9w UV sterilizer in-line with only one of the return pumps.

I feel like if i could keep a CUC alive, a lot of this would self heal. The recent order to ReefCleaners did not fair well. Only about 25% (or less) survived. I’m down to less than 15 snails in a 40gal setup.

Water parameters still seem to be testing fine, however i am thinking of taking a sample to someone to test it.

BRS Member
I am currently going through the exact same thing. I believe its dinos.

I also ordered some Vibrant by Underwater Creations so if the h2o2 doesnt work ill move on to vibrant.

dinos is toxic to some inverts and cuc so is probably the cause of their death.
I

BRS Member
Hi, I tried this dosing for 3 days as was recommended by Dong and four days later the Dino's seem to be gone.
Try this one:
https://www.reef2reef.com/threads/diy-kz-coral-snow-with-97-purity.211722/

BRS Member
Officer
I have fought this fight of dino a couple of times. I have had success with elevating nitrates and a 5 day blackout. water changes only made them worse. I also dosed the coral snow which was noted in the above post.